“Immediate Action Required” is a phrase that’s often used by scammers to scare people into thinking that their computer is infected with malware. Not that it can’t be used legitimately, but this phrase is often employed to make various fake warnings sound more official. 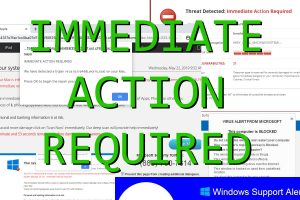 That’s a quote from an alert that pops up when bad ad takes you to a malicious website. Such sites lead to fake security scans which then try to get you to download and install a fake antivirus program.

These “Immediate Action Required” alerts originate in the browser — they’re basically just webpages made to look like system warnings. Thus, any device with a browser is vulnerable: there are Mac, Windows, as well as mobile versions of such junkware-pushing sites.

Fake security warnings can be dangerous and should be dismissed:

Similar to “Immediate Action Required” are:

There’s no shortage of these websites. The phrase “Immediate Action Required” can be used in legitimate warnings, of course — for example, in flood warnings. But when it’s something vague about your computer or your phone being compromised, yeah, it’s a scam.

A bad ad is shown on a website. These ads are rare but they can appear on even the most reputable websites. Sometimes scammers manage to sneak their ads in and nobody catches them.

The bad ad causes an immediate redirect to a malicious website, or an adware virus opens it. This site displays the “Immediate Action Required” warning. To make it seem very urgent and scary, it includes a bunch of claims:

These “Immediate Action Required” warnings can be very impressive, with various noises, animated screens, and a robot voice reading out the text on the screen — nothing like what real security software acts like. And don’t be intimidated by the time ticking down until “irreversible damage” or some other nonsense — I’ve dismissed warnings like that many times and nothing bad ever happened — in fact, if you revisit the same “Immediate Action Required site, the timer will restart.

You’re told to “begin the repair process” and press a button called “Scan Now” to scan your system — which is total nonsense because a website can’t scan your computer, they don’t have access to your files.

Other things you might be told by the “Immediate Action Required” alerts include:

Anyway, once the site “scans” your computer, it shows a couple of viruses it “found”. There’s a button that says “Remove Viruses Now” or something similar. Clicking it downloads a useless program like PC Cleaner, Smart Mac Booster, or PC Regcleaners.

A breakdown of one version of the “Immediate Action Required” fake warning and how it works can be found in this post. 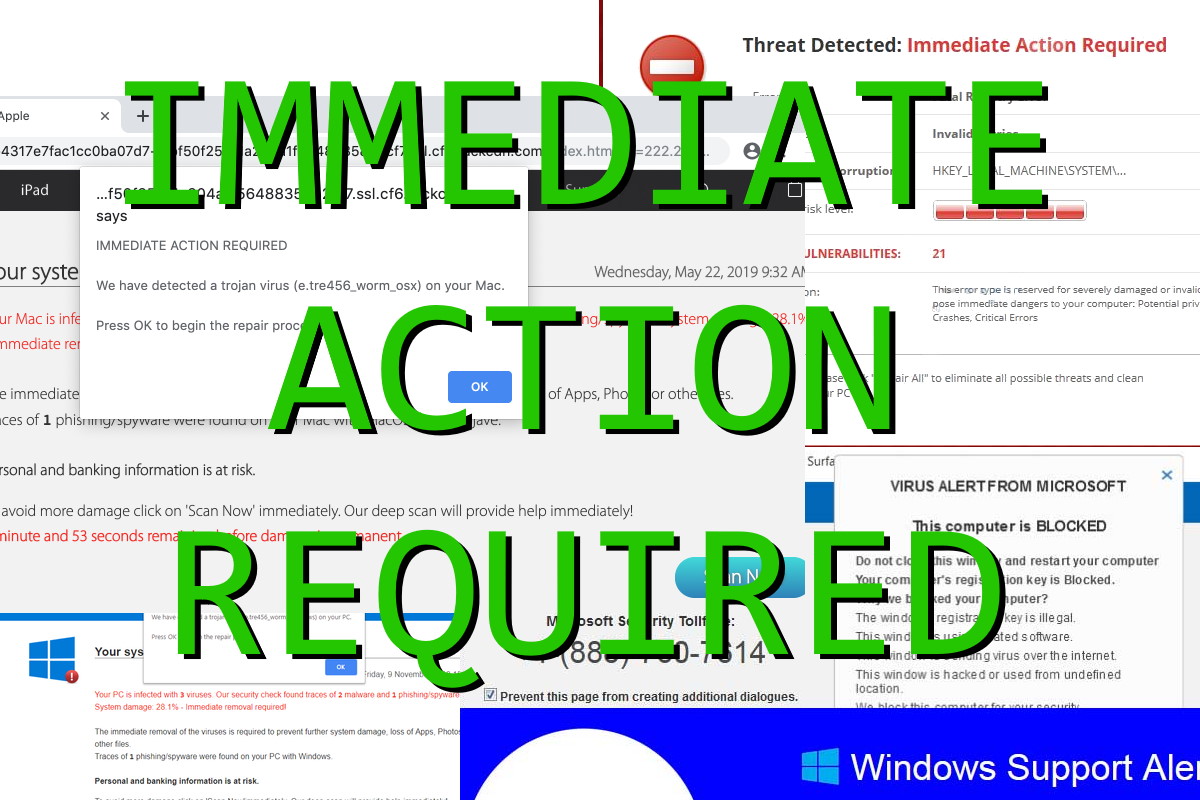 How to deal with scams like “Immediate Action Required”

Since scams like “Immediate Action Required” show up thanks to bad ads, it’s good to avoid websites that show such ads. If you have a notification spammer or an adware virus on your computer, you should take care of that, too. Real-time protection using a good-quality anti-malware program might be helpful, as they could block sites that are known to be malicious, but it’s not going to be 100% effective.

So it’s also great to be able to recognize that “Immediate Action Required” and similar warnings are fake and should be dismissed. If your browser is locked by the malicious site, you can end it by pressing Cmd+Alt+Esc for Mac, Ctrl+Shift+Esc for Windows, finding your browser process (Chrome, Safari, Edge, or other), then ending it. Don’t open the old tabs and it’ll be fine.

Finally, if you did download some program that “Immediate Action Required” was trying to sell you, don’t worry — it’s probably not real malware, so just uninstall it. You might need the help of a real anti-malware program, like Combo Cleaner for Mac OS or SpyHunter for Windows, because some of these fake security programs are very persistent and refuse to be removed normally.