The Wod007.com website is a fake antivirus scanner that promotes potentially unwanted programs by scaring people with fake security warnings. Seeing Wod007.com might indicate the presence of adware programs on your computer, but the scan results displayed by Wod007.com are simply fake, and the programs that Wod007.com promotes should be avoided.

Wod007.com presents visitors with a warning:

Your Windows Computer Could Be Infected With Viruses!

Your device could be infected. Over 98% of scanned computers have harmful files including phishing and spyware. Your system may be at risk of irreversible damage – Immediate removal advised if infected!

Traces of Phishing/Spyware may be found on your computer. Personal and banking information may be at risk. 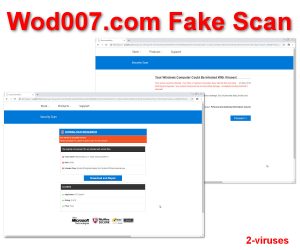 This fake warning is not coming from anyone legitimately concerned for your computer’s health. Instead, this page is created to promote commercial software.

A fake antivirus online scanner that is promoting a rogue application is nothing new online. But how does one know when a website is fake or suspicious? You could scan Wod007.com with a URL scanner, but malicious websites are difficult for AI to recognize and besides, it’s not practical to scan every new site that you visit. It is simpler to just be vigilant and watch out for the red flags that many phishing and scamming pages share. Even if Wod007.com might look trustworthy at first, it’s possible to find the problems with it and avoid being roped into its scam.

Impersonation and a fake scan

Wod007.com is trying to spoof a Microsoft site in order to gain trust. You’ll notice that the “menu” at the top of the page is not interactive. Click as much as you want on it, it won’t do anything. The scammers behind Wod007.com did not put too much effort into their site, so that menu is just a static image. If you right-click on it, the drop-menu will reveal that.

If you click on the Proceed button, Wod007.com “performs a scan” of your computer. Except it can’t do that because websites cannot access your files without your explicit permission — it would be a big security violation. Web antivirus scanners exist, but they require clients to upload the files themselves. Wod007.com never asked for permission to access files. So, Wod007.com pretends to perform a scan.

After an impossibly quick “scan”, Wod007.com displays text saying that it detected some malicious files. However, the files that Wod007.com talks about aren’t on your disk for you to find. Not among hidden files, nowhere. Another clue that the scan is fake is that Wod007.com detects the same threats on every machine. Like I said, Wod007.com did not have a lot of effort put into it.

If you now click the “Download and Repair” button, you will be taken to another website which will offer a “PC Repair Tool” for you to download. The one that I got is similar to Qbit Clean Pro, but the offer can be different for different people. Quite a few antivirus apps were unhappy with the file that Wod007.com was promoting.

If I run the downloaded program’s installer, I find that it bundled another unwanted application with it, one similar to Driver Updater Plus. After installation, the Qbit tool immediately detects dozens of potential “problems” — even on a clean installation of Windows. Optimizers are suspicious because so many of them have turned out to be useless and even harmful. And the fact that Wod007.com’s suggested program uses bundling to advertise more software is suspicious because bundling is used to distribute malware.

So, Wod007.com is a tool that impersonates Microsoft and performs fake antivirus scans in order to promote a few potentially unwanted programs. The PUPs will then try to scare people by detecting fake problems on their computers and push their paid versions, making money for their publishers. 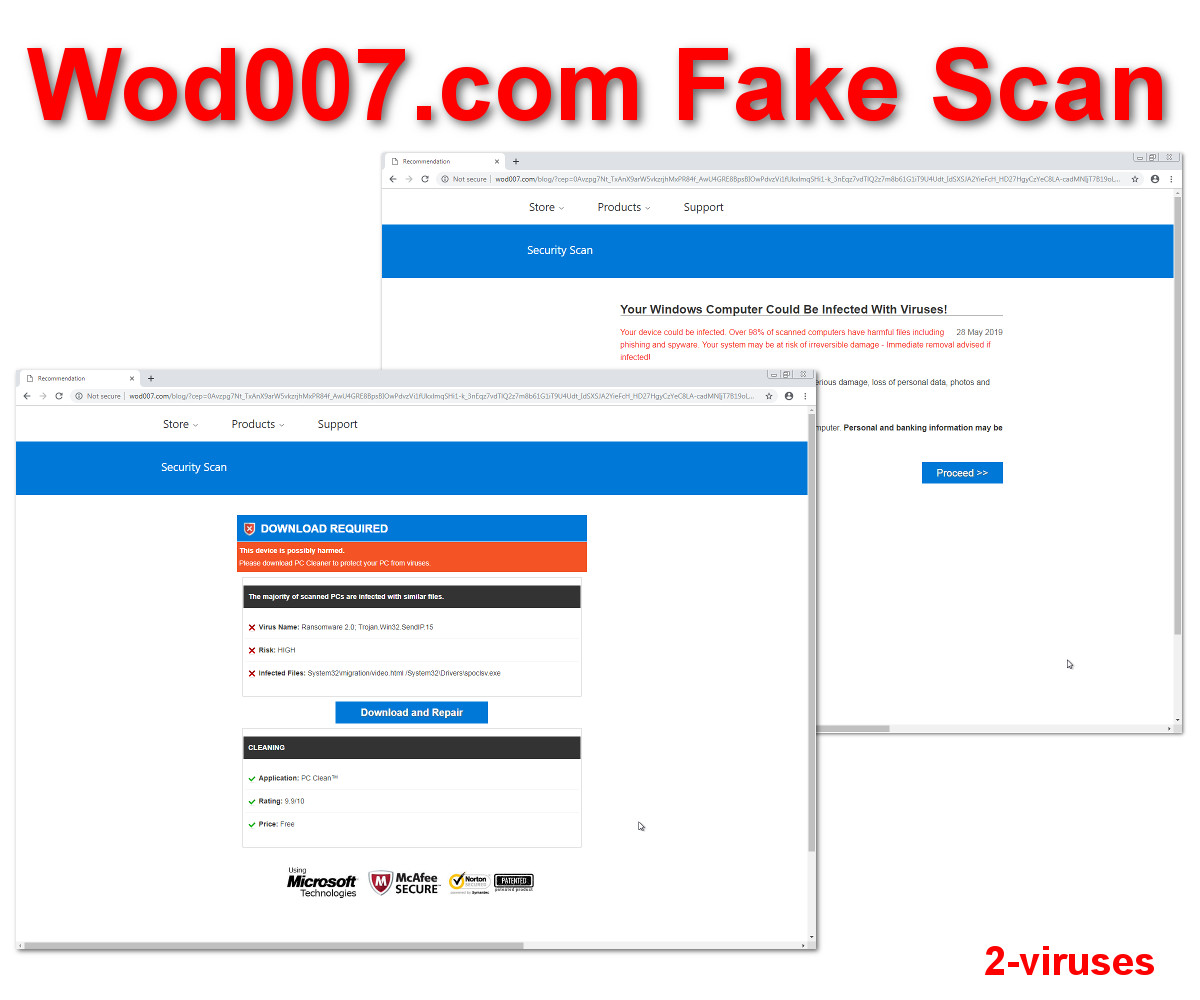 What directs people to Wod007.com?

Adware and malicious ads can lead people to Wod007.com. In order to make money from scamming people, Wod007.com needs to be promoted somehow. Wod007.com won’t be advertised by reputable and professional ad networks which have rules against malicious ads. So, Wod007.com instead turns to poor reputation and illegitimate networks which use sites like Studynerdz.com and Deloplen.com to push unwanted, intrusive ads to unwilling users. It’s all rather unethical, but Wod007.com is undeterred.

You definitely should scan your machine if you suspect that adware has led you to Wod007.com. Wod007.com is harmless compared to other sites that some adware programs promote.

Many hijackers and adware like Wod007.com install some of their components as regular Windows programs as well as additional software. This part of malware can be uninstalled from the Control Panel. To access it, do the following.
Wod007.com Fake Scan facts
Download Spyhunter for Malware detection
(Win)