“Four virus” is a strange term, but it is used that way by many fake antivirus warnings online. You might run into pop-ups online that claim that “Your system is heavily damaged by Four virus!”. These alerts are fake. They’re basically ads that are trying to scare you into downloading and installing an app.

“Four virus” pop-ups appear unexpectedly, always in the browser. Mostly, they’re advertised by pirating sites, but any website can show them. If one appears on your screen, just close it. Don’t pay attention to it and certainly don’t install any apps that it wants you to install. 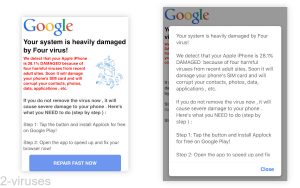 About “Four virus” in short:

Your system is heavily damaged by Four virus!

The “Four virus” scam is a pop-up alert that appears when you land on a website or when you click somewhere on it, just like any pop-up ad.

Your browser might get hijacked by the “Four virus” alert, leaving you unable to close the window. However, the “Four virus” page itself is not too dangerous. Just like other fake security warnings online (3 Viruses, 27 Viruses, etc.), the “Four virus” hoax is there to scare you into installing potentially unwanted apps.

How to know what the “Four virus” alert is fake

The “Four virus” scam alerts have quite a few signs of being fake. If you’ve seen a few scam alerts, you’ll notice the similarities:

To expand on these points a bit more, by “alarmist language” I mean when the “Four virus” pop-up uses lines like soon it will damage your phone’s SIM card or it will cause permanent damage to your system, corrupt your photos, data, applications, etc. Such language is not used by legitimate antivirus programs, which tend to be short on details and stick to This program is dangerous and might compromise your privacy or damage your PC. “Four virus” tries to scare you to take action as quickly as possible, sometimes even displaying a timer. Normal antivirus programs quarantine threats and wait for you to decide what you want to do. 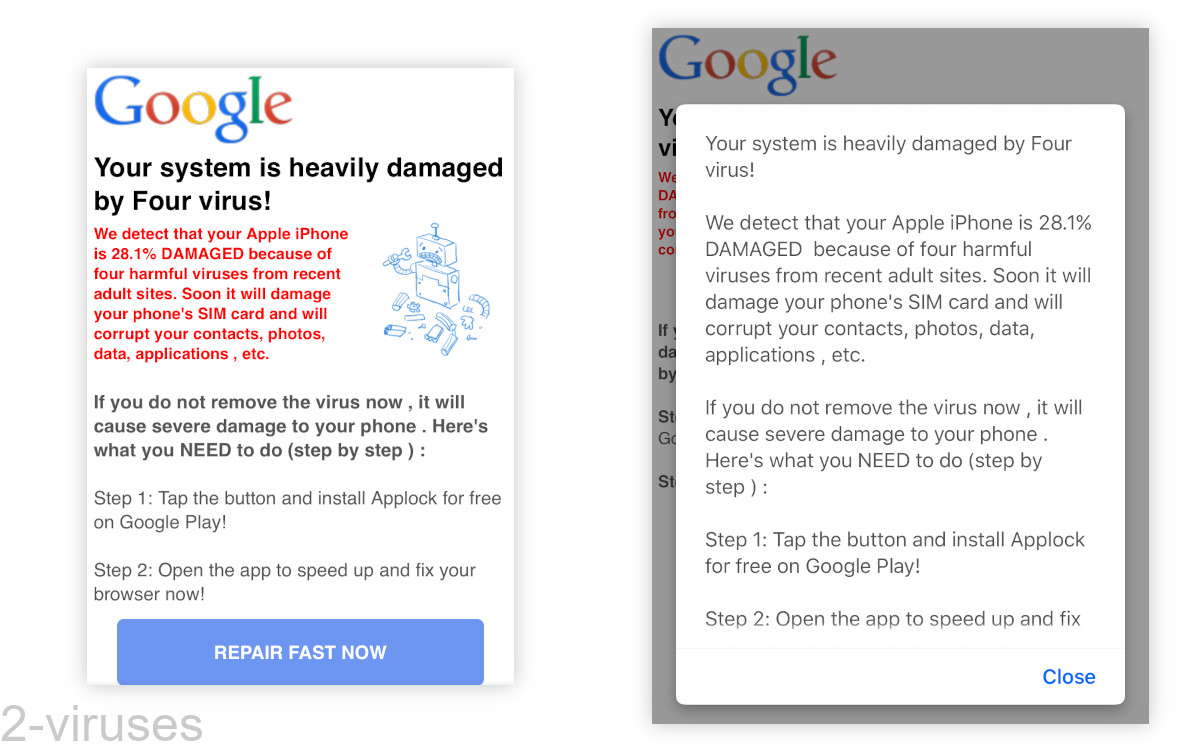 It is a malicious ad

“Four virus” says that you got infected on adult sites, but real antivirus applications don’t speculate on how you got infected: they find the threat, remove it, and that’s it.

The “Four virus” alert is shown in the browser – it can’t know whether your device is infected because it can’t access your files without your permission. Online antivirus scanners usually ask you to upload the files that you want to be scanned.

Another reason to be suspicious of the “Four virus” pop-ups is the URLs that display it. You get random and nonsensical names like:

Some of these URLs get flagged as malicious by antivirus scanners. If your device is protected with an antivirus program, it might block some of these malicious pop-ups before they can appear on your screen.

What’s the danger of the “Four virus” alert?

It can lead to malware

The mobile version of “Four virus” tries to get you to install an app on your phone. This is dangerous – there are genuinely harmful apps available online, including the official stores: file-encrypting ransomware, banking trojans, screen-lockers, ad clickers, and adware.

The desktop version of “Four virus” promotes fake antivirus programs – not as dangerous as some viruses, but still to be avoided. Fake antivirus tools and optimizers that perform fake scans that return predetermined results with infections and errors that these programs will only “fix” when you buy the paid version. Other applications find and flag harmless settings, shortcuts, and temporary files as problems, then they pretend to fix them.

I haven’t seen “Four virus” do this, but some fake alerts sometimes incorporate phishing, which is when they ask you to sign in using your username and password. If you fall for one of these, your password is revealed to criminals. If that happened, make sure to change your password. 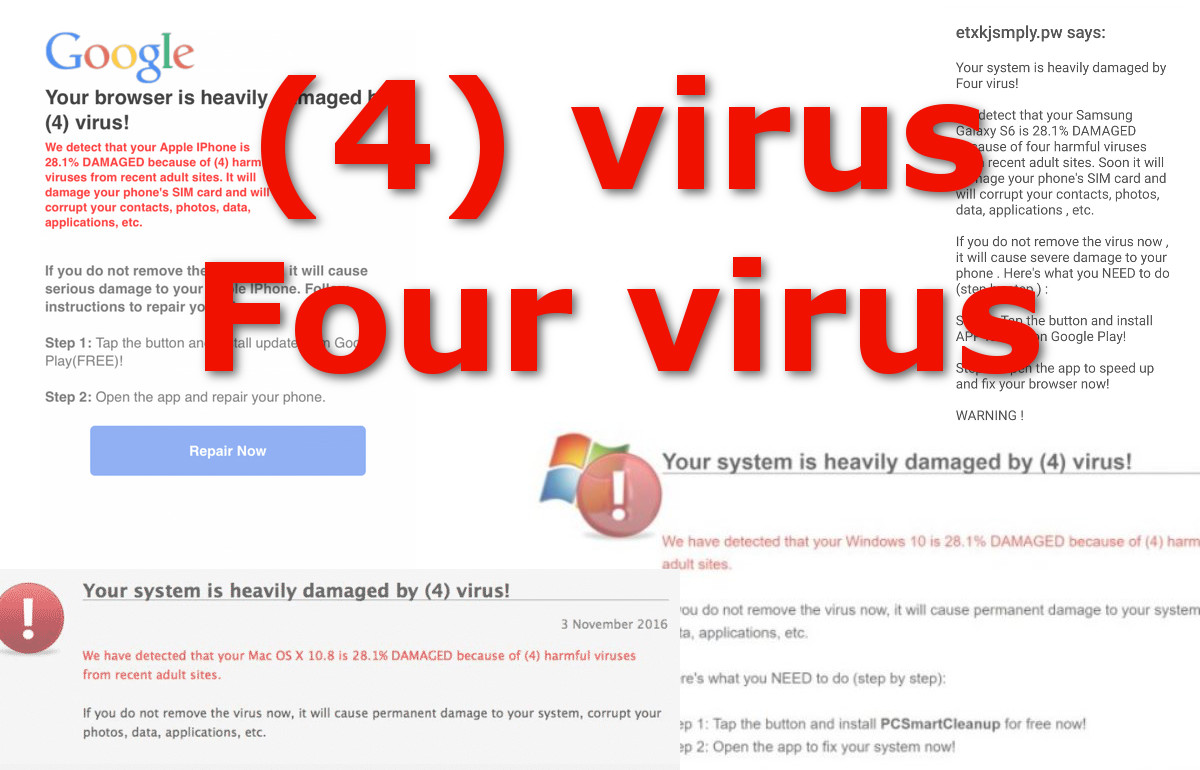 How to get rid of “Four virus” alerts

If you found yourself faced with a “Four virus” scam alert, you can escape it by closing its browser tab.

If you downloaded the app that “Four virus” was promoting, then remove it quickly. Scan your device with an antivirus program, such as Spyhunter for Windows, Combo Cleaner for macOS, and others. Sometimes, malicious apps pretend to be system apps, which makes them difficult to discover when searching by yourself, but antivirus programs can still recognize them.

Also, check your browser extensions and remove those that are suspicious. And review your notification settings, as that’s a very popular way that malicious ads spread.