PC Regcleaners is another malicious program posing as a registry cleaner. System optimizer has become a dirty term for a reason: there are so many optimizers that are malware or PUPs (potentially unwanted programs) that not surprising at all that PC Regcleaners has turned out to be a virus.

Versions of PC Regcleaners have been bothering people for a few years now by refusing to be uninstalled, crashing the whole system, and breaking the settings by messing with the registry. The newest PC Regcleaners incarnation is a Trojan that uses the infected computers to perform ad fraud.

First, programs like PC Regcleaners, Tweakerbit, OneSafe PC Cleaner, and PC Registry Shield pretend to be legitimate optimizer tools and are distributed by some websites that host free software. Some software download sites do not have very high standards for what they distribute. False advertising helps spread this Trojan wider, too. If you installed PC Regcleaners, you might have done it because of their slick, professional-looking website that boasts about enhancing system performance, boosting memory, cleaning junk, boosting the browser, and scheduling scans — if these functions exist, then they’re only available if you buy a paid version, not the one that you actually download.

Adware can be used to recommend PC Regcleaners, too. A lot of PUPs use illegitimate advertising networks to spread to (infect) more computers. Adware can open pop-up windows that prompt you to download PC Regcleaners or any other software, and these pop-ups sometimes have no obvious way to dismiss them, making people feel like they have no choice but to install the malware. And then, if you’re disappointed by how useless PC Regcleaners is, you uninstall it, it might not go away peacefully — I had to uninstall it twice — and this indicates a more serious virus being present on your system. 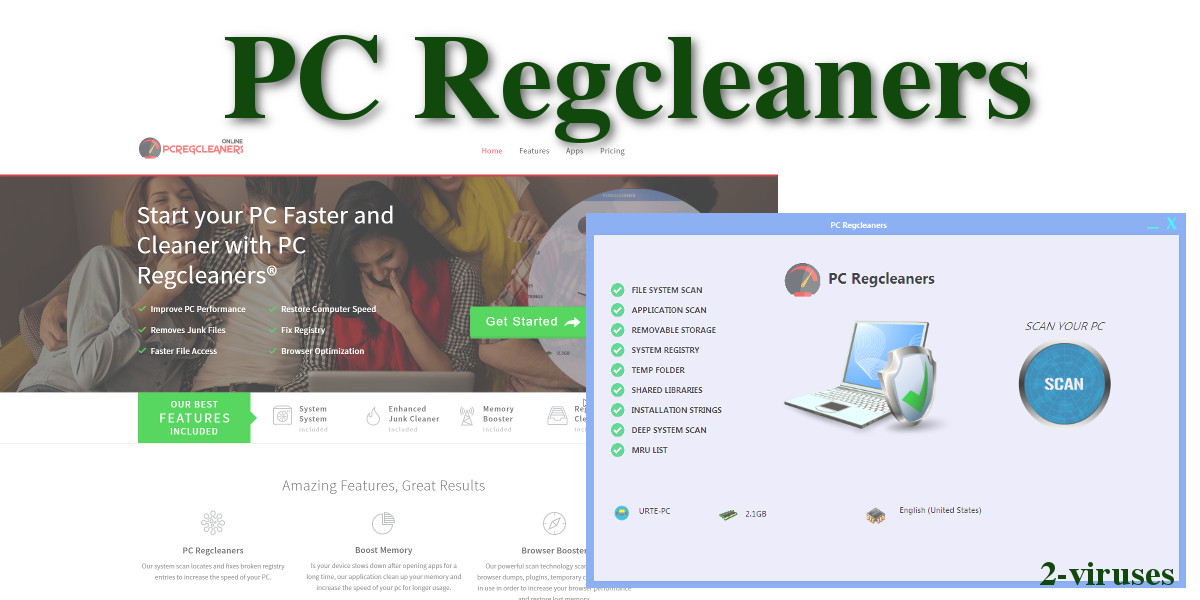 PC Regcleaners claimed to be able to boost a computer’s performance with half a dozen different functions, yet, none of them are available when using the app. And I’m not saying that any of these advertised features would have been useful or legitimate. PC Regcleaners essentially claims to speed up your PC by deleting temporary and junk files, which can be done without any third-party software, as Windows has already developed tools for that — Storage sense and Disk Cleanup.

Once you start PC Regcleaners, after clicking the “Scan” button the first time it doesn’t do anything other than have Windows ask you if you allow it to make changes to your computer. Oh, and a few epizyhost.exe processes start in the background, originating from the PC Regcleaners’ “background” folder.

As more evidence of the maliciousness of PC Regcleaners, here are the VirusTotal scan results: they’re pretty bad for both the PC Regcleaners installation file and the epizyhost.exe file.

How to remove PC Regcleaners

Seeing as many antivirus programs recognize PC Regcleaners as a virus, an up-to-date security program would warn you to not install it. It’s a good idea to take these warnings seriously and check what they mean.

You can remove PC Regcleaners manually, though it might not successfully uninstall at first, it’s just important to monitor the files and make sure to remove any leftovers. You could also use an antivirus program like Spyhunter to look for PC Regcleaner files and other malware on your system. Some Trojans can be very well hidden and are tricky to remove, and if it was adware that caused you to install PC Regcleaners, it should be removed, too.

Many hijackers and adware like PC Regcleaners install some of their components as regular Windows programs as well as additional software. This part of malware can be uninstalled from the Control Panel. To access it, do the following.
PC Regcleaners facts
Download Spyhunter for Malware detection
(Win)