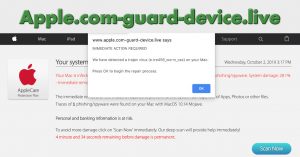 Apple.com-guard-device.live is only one of many scam websites pushing unwanted applications (there is Apple.com-optimize-mac.live, Lp.macsmart-cleanupc.club, Apple.com-mac-optimizer.icu, and others). This is not a new problem, unfortunately, it’s still widespread.

These pages pretend to be security warnings from Apple, but don’t be fooled — they have nothing to do with the official company. Apple themselves warn customers to ignore these fake warnings.

Apple.com-guard-device.live is nothing more than a scam created by malicious actors to sell fake security software:

Scareware is a type of malicious program that stresses people out and then asks them for money to fix nonexistent problems. Apple.com-guard-device.live appears to be an example of scareware. It threatens that your data is at risk of being stolen or deleted and gives you a 5 minute countdown. Here’s the text this warning presents:

Your system is infected with 3 viruses!
Your Mac is infected with 3 viruses. Our security check found traces of 2 malware and 1 phishing/spyware. System damage: 28.1% – Immediate removal required!
The immediate removal of the viruses is required to prevent further system damage, loss of Apps, Photos or other files.
Traces of 1 phishing/spyware were found on your Mac with MacOS 10.14 Mojave.
Personal and banking information is at risk.
To avoid more damage click on ‘Scan Now’ immediately. Our deep scan will provide help immediately!
4 minute and 34 seconds remaining before damage is permanent.

To know how to stop these alerts from showing up, first we need to know what causes them.

It’s possible that the alerts appeared thanks to malicious ads and redirects on shady websites. If Apple.com-guard-device.live popped up in your browser, close the page (you can press Cmd and W at once to close the current window). It’s possible that this was a one-time thing. A bad ad doesn’t mean that your Mac is infected. 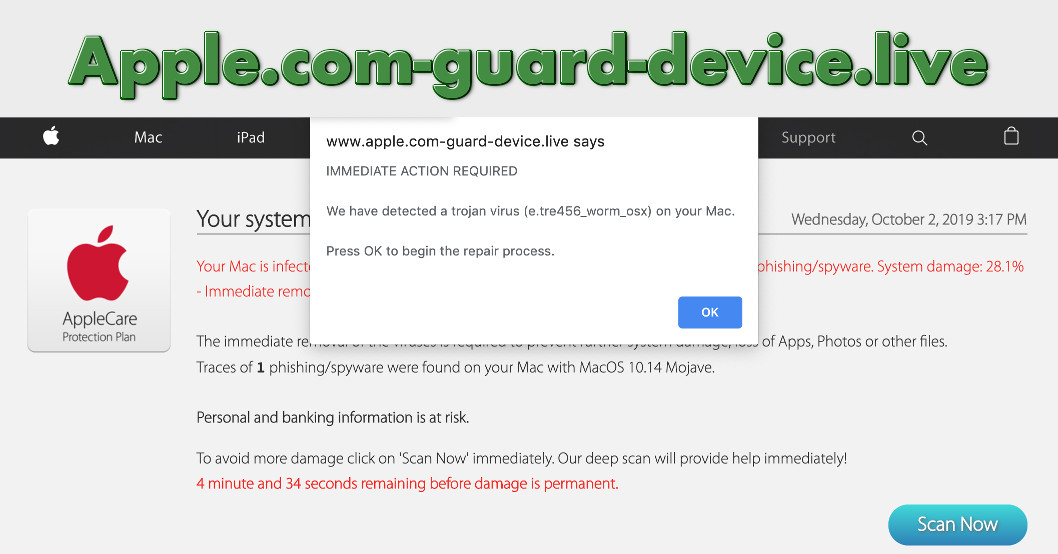 However, often the cause of these fake warnings is a malicious program already installed on your Mac. Yep, Macs have malware, too. It’s not usually as dangerous as Windows trojans and ransomware viruses, but it should still be taken seriously. If you started seeing system warnings on your Mac that take you to Apple.com-guard-device.live, that’s the fault of some kind of malicious application in your system.

If you happened to download and install CleanupMyMac — the application that Apple.com-guard-device.live recommended — it’s best to delete it because it’s nothing more than a scam. It tells you that it found a bunch of problems on your computer, but it’s only doing it to get you to buy it. What a business model.

How to recognize fake alerts

But how would you know that the Apple.com-guard-device.live alerts are fake? The scammers try to make their warning as realistic as possible, from the URL including “Apple”, to the page imitating a genuine AppleCare page.

There are things that give away Apple.com-guard-device.live alerts being fake:

During stressful situations like when the Apple.com-guard-device.live alert appears, it’s important to stay calm and to remember that there are malicious actors out there, trying to take advantage of innocent people.