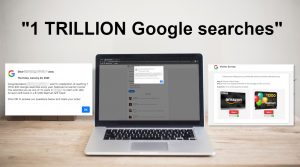 In short about “1 TRILLION Google searches”:

“1 TRILLION Google searches” appears on your phone or your computer in a pop-up when you end up on one of many sites made to spread this phishing scam. The URLs that I’ve seen that hosted this fake were called things like Originatstatement.xyz, Innovativescientificzz.xyz, Ingeniouscommunications.xyz, Inspireddaily.xyz, Imaginativetechnologies.xyz, etc. All the pop-ups look about the same:

Congratulations [phone model] user! In celebration of reaching 1 TRILLION Google searches every year, National Consumer Center has selected you as one of 10 users in [location] to claim a $1,000 Amazon Gift Card or a $1,000 Wallmart Gift Card!

Click OK to answer our questions below and claim your prize!

“1 TRILLION Google searches” starts by addressing you by your phone model and your location – information easily accessible to any website. It’s not data that only Google would know, so don’t let that intimidate you.

“1 TRILLION Google searches” is not a very polished scam. As usual for fake giveaway sites, is placed some fake Facebook comments at the bottom to make the whole thing look legitimate – but the comments are very bare and not interactive, the scammers didn’t really try hard. Also, Google’s logo in the pop-up is so poorly cropped. And you can get through the survey without choosing any answers and still “win”.

What is “1 TRILLION Google searches”?

“1 TRILLION Google searches” is yet another National Consumer Center scam that redirects to Amarktflow.com or a similar site. Amarktfow collects victims of a variety of scams that promise gift cards, free phones, and cash prizes. Then it orders people to provide their personal details, including their name, address, and payment information. Following the instructions will probably cost you some money, but it won’t get you your prize. 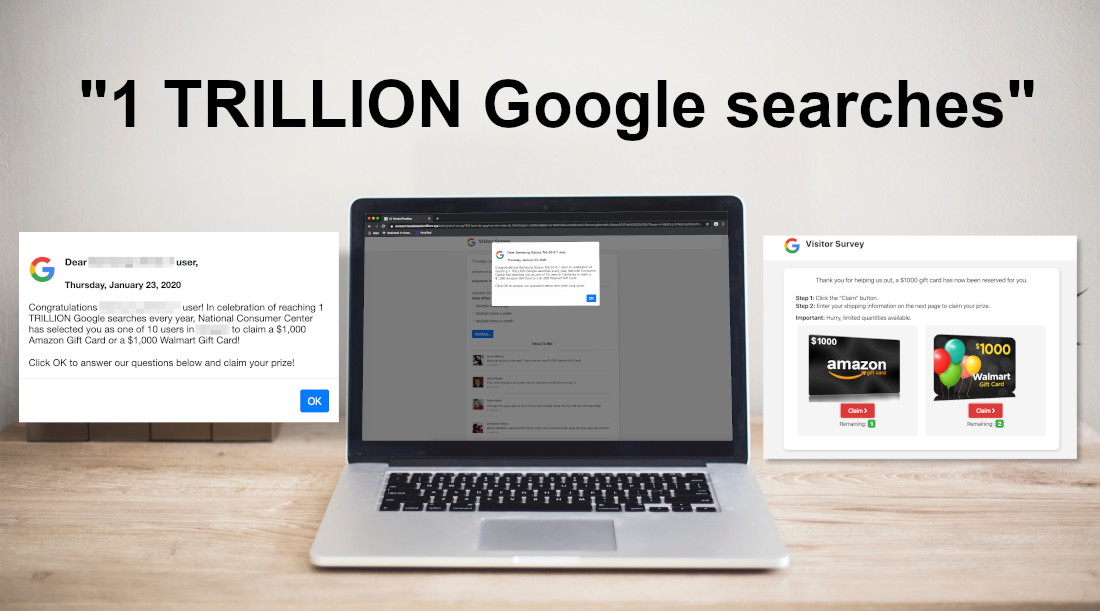 To get the prize that “1 TRILLION Google searches” promised you, you may be asked to make a token payment to “confirm your identity”, a payment for shipping, and other fees. Likely, your data will be used to get you on a rewards program that seems to be Flash Rewards. This program is a gamified coupon site. It asks you to complete small tasks, like trying a product or buying a small item, to “level up” for a chance to get valuable rewards, such as gift cards. Such rewards sites don’t help users save money – they only waste people’s time by talking them into spending just a bit more money on products they don’t want. If you’re curious, here are some complaints.

How to avoid “1 TRILLION Google searches”

Some people never have to deal with seeing any scams online, others can’t seem to escape them. “1 TRILLION Google searches” and other scams spread in malicious ads and whether and how you encounter them depends on a few things:

It’s not a bad sign to see a scam like “1 TRILLION Google searches” once in a blue moon, but if these fake reward pop-ups are a regular thing for you, you need to improve your online security. A few things that you can do:

If you did fall for “1 TRILLION Google searches” all the way, you should try and unsubscribe from whatever you were subscribed to. If you find payments already conducted on your card, ask for a refund or contact your bank. If your personal information ends up in the hands of criminals, they could use it to steal your identity or for targeted phishing attacks, so be very careful.