Your Battery Is Damaged By Viruses pop-up is another fraudulent message, claiming that your battery has been affected by malicious programs. Similar social engineering scams have been noticed before. For instance: “Potential threats detected” or “Your Mac might be infected” are all created by vicious cyber criminals, attempting to infect you with malware or other types of damaging programs (Tech support scammers bilk millions from US victims).

To make the Your Battery Is Damaged By Viruses fake notification more believable, crooks claim that “Facebook system has detected (14) viruses causing serious damage to your battery, and must be removed and fixed immediately”. Even though most of the technical support scams target computers, running on Windows or Mac operating systems, this time, it could be that mobile phones are also considered as a target. If you do encounter this message in your phone or computer, we hope that you won’t decide to click on the “Free Repair Now” button. After clicking on it, you could be redirected to remote websites, or could automatically download a malicious file. 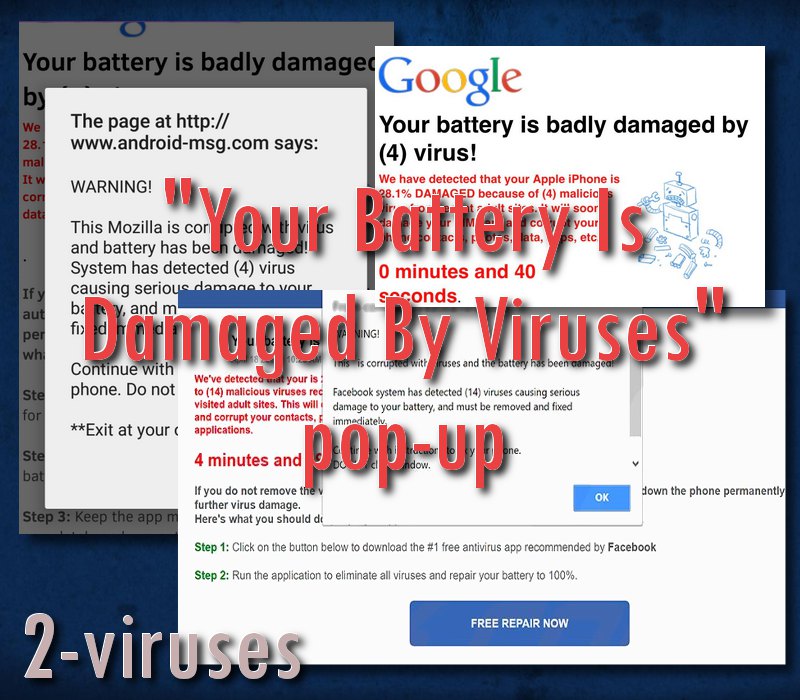 One of the victims reporter that he/she noticed this Your Battery Is Damaged By Viruses pop-up after opening the Facebook app. In some cases, the notification appeared while the victim was simply scrolling down the news feed. Even though it might seem like Facebook is attempting to warn you of suspicious activity in your computer/phone, this message is not supported by Facebook, The popular social networking site has nothing to do with this message (Pop-Up Mobile Ads Surge as Sites Scramble to Stop Them).

By clicking on it, you are at risk of becoming infected with malware. Therefore, we hope that you will close Facebook as soon as this message is presented to avoid further damage. This situation is similar to the one we discussed in “Dear Facebook user, congratulations!”. Even though Facebook is mentioned, this does not mean that the message is actually generated by people from this network.

Security researchers are explaining that Your Battery Is Damaged By Viruses pop-up is most frequently displayed for users of mobile phones. The question remains: why is such content displayed? Well, our security team has to remind you that many of the applications for mobile phones require people to agree to receive various types of third-party advertisements. Do you remember installing a tool from unknown developers?

It might be the one bringing unwanted content. The same principle applies to users of computers. If you install random freeware programs, it is very likely that they are exposing you to fake messages like Your Battery Is Damaged By Viruses pop-up.

How to prevent Your Battery Is Damaged By Viruses pop-up from ever appearing on your screen?

As we have mentioned, the Your Battery Is Damaged By Viruses fake notification can be disturbing your browsing because of the fact you have installed a suspicious tool/app. Please look through your device and try to find programs you do not recognize, or have installed recently. Remove them and see whether this will solve this annoying issue.

If you notice Your Battery Is Damaged By Viruses pop-up on your computer, we hope that you will close your browser and run a scan with Spyhunter. You could also take a look at the programs or browser extensions you have installed. If you find any suspicious tools, remove them. Desktop programs can be removed via Control Panel, and extensions are found in lists of active plugins.

However, if Your Battery Is Damaged By Viruses notification is displayed on your phone, we recommend a slightly different approach. You should access the Safe Mode. For Android users, we have written informative guidelines for this procedure. Once your Android is in Safe Mode, open Settings, select Apps or Application manager and select the app you want to remove. For iPhones, Safe Mode is entered after these steps:

1. Turn off your phone.
2. Turn in on by holding down the power button.
3. As soon as the screen lights up, hold down the Volume down button until you see the Apple logo.
4. When the phone fully loads, you will be able to get rid of the unwanted content.