MacRapidizer is categorized as PUP (potentially unwanted program). It is a tool that’s supposed to make your Mac computer faster and more organized. If you take a look at their official website at macrapidizer.com, you will see that it is described as “game changer in Mac care. It is aimed at Making Mac system Optimization Efficient, Sustainable & Trustworthy”. Unfortunately, this promotional piece is more than misleading. 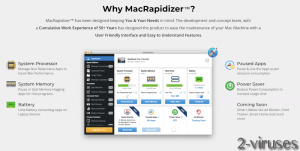 Optimizing features of this utility tool is highly questionable and it will definitely bring some unwanted qualities that can make your Mac slower or even infiltrate other malicious software into the system. Also, you might experience various excessive ads that are scary or exaggerated.

If you have installed MacRapidizer on your computer or it was automatically installed behind your back, please read this article to the end and learn why this application is considered to be unwanted and also – how to get rid of it in the fastest way possible.

Reasons Why MacRapidizer Is Unwanted 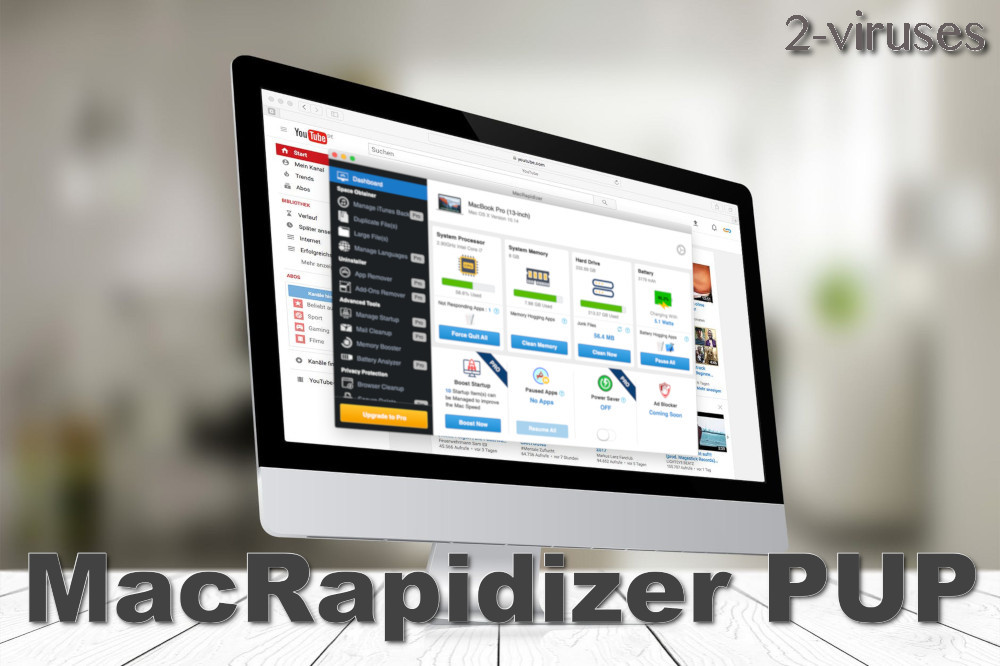 The main reason why MacRapidizer is considered to be unwanted or even malicious is fake-positive results. Immediately after the installation, MacRapidizer will scan your computer and check various components of the system – processor, memory, hard drive, battery (if it is a laptop), paused apps and so on. In other words, they are making sure that the hardware of your system is operating as it should.

Those parameters might be right and accurate, but there are additional features that are available only if you purchase a pro version of this application. Pro version features attributes like Startup Boost or Power Saver. Obviously, you would like your Mac to boost faster or make it use less power, but there are plenty of free tools available that can do that for you and MacRapidizer will brutally force you to make the payment and purchase the Pro version.

We have said that false-positive results are what you can expect from this application and it does this for a purpose – to create an image that your computer is in a really bad condition (even though it’s not), so you need MacRapidizer to solve the problems. That’s both unfair and malicious.

Besides that, you can expect additional advertisements offering various services or goods. That’s another reason why MacRapidizer is considered to be unwanted. It even features some attributes that are common to adware infections, because those ads can lead you to possibly dangerous websites.

There are plenty of free rogue system optimizers and potentially unwanted programs similar to this one – Mac Tonic, Mac Cleanup Pro, or Mac Space Reviver. Usually, they all share the same features and force users to purchase a premium version of the software, even though it is not necessary or useful at all.

How This PUP Infected Your Computer

MacRapidizer PUP might be downloaded directly from App Store, but if it appeared on your computer out of nowhere and you haven’t installed it yourself, MacRapidizer probably was infiltrated into your computer using deceptive methods. 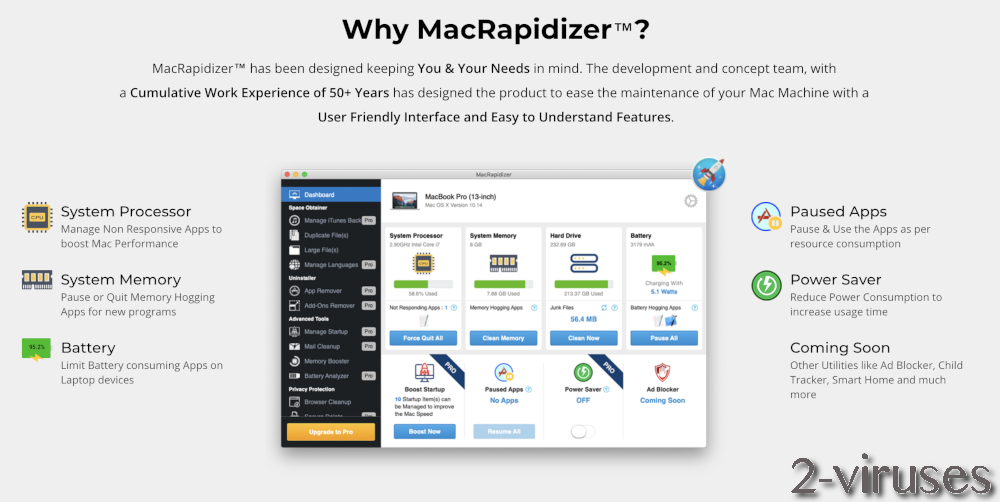 Usually, applications like this one is bundled to other free software that can be downloaded from the Internet. So when you download and install some free and legitimate program, there is a chance that MacRapidizer or similar infection will be installed alongside without even warning you.

The best way to avoid this happening is to keep your computer secured with anti-malware tool that features real-time protection attribute, such as Plumbytes or Malware Fighter.

How To Eliminate Malware Fighter

First of all, you should try to uninstall MacRapidizer manually, just like any other Mac application – drag and drop the icon to the trash bin, open Libraries folder and eliminate all files related to this application.

Unfortunately, it might be impossible in some cases, so you should get yourself anti-malware tool that can do that for you. Try using Combo Cleaner and scan your Apple computer with it. After several minutes MacRapidizer should be automatically eliminated and never come back again.