Mac Space Reviver potentially unwanted program is a Mac-cleaning tool which helps people to scan and clean duplicate clutter easily to free up a lot of space which in turn will improve Mac’s performance. Despite the tempting description, the tool has been categorized as a potentially unwanted program, similar to MacShiny tool we have discussed in the past. Instead of helping you improve your Mac, the tool can compromise the security of your operating system (What you should know about Rogue Security Software).

We ran the msr_msite.pkg program (which is the installer for Mac SpaCe Reviver) through multiple security tools to figure out whether anti-malware tools detect it as suspicious. Just as we have suspected, the Mac-focused program is detected as a potentially unwanted program, Gen.Variant.Application.Mac!c, OSX/GT32SupportGeeks.sxlqx and Suspicious_GEN.F47V1121. This means that owners of anti-malware tools like BitDefender, Emsisot, Symantec and Avast have confirmed this tool to be malicious. 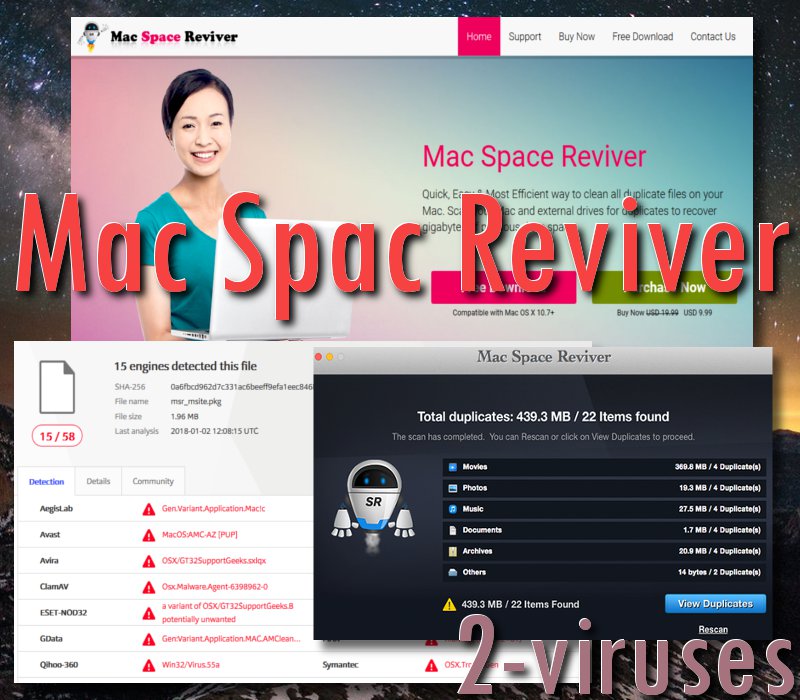 During our analysis, we also found a lot of reports from users of Mac Space Reviver software. According to these unsatisfied customers, they are frequently introduced to pop-ups, asking whether they would like to have more space on their Macs. Since this message is displayed repetitively, people began wondering whether something malicious could be hiding in their operating systems (Recognize a Fake Virus Warning). Security researchers agree with such predictions and have no doubt that the rogue Mac Space Reviver program was secretly installed into operating systems.

In the official website of Mac Space Reviver unwanted program, people are offered to try out the free version of this software. It is said to be compatible with Mac OS X 10.7+. However, we suspect that the free version won’t actually clean duplicates, nor will it recover significant storage. Instead, the free version is meant to intimidate users. What do we mean? Well, after running scans with Mac Space Reviver, you will be warned about multiple threats and computer issues. To solve them, users will be required to purchase the full version, costing $9.99.

Since Mac Space Reviver software has been categorized as a potentially unwanted tool, there is no doubt that you should not pay for the full version (Fake security software takes aim at Mac users). Since developers use deceptive means for distribution and for promotion of their tool, there is no reason to believe that their program will be useful. Spend money on a reliable anti-malware tool which will manage your Mac and improve it’s performance.

Many of the victims of the Mac Space Reviver infection have pointed fingers at one possible source of this unwanted program. As they suggest, they began receiving the fake message “Do you need more hard disk on your Mac” after they installed a free program called FileZilla. Therefore, we hope that you will be careful not to involuntarily download redundant programs that won’t bring any benefits to your operating system.

Why am I being bothered by this suspicious Mac Space Reviver unwanted program?

As we have mentioned, you might have accidentally downloaded this tool during an installation of another software application. This happens a lot of and people should be aware of the ways to prevent this from. However, many users are still careless during these installing processes. If you were to be careful, you should carefully review the installing procedure and make sure that no unwanted tools will be installed alongside the program you selected.

In order to check whether Mac Space Reviver virus is in your Mac, you should open the “Applications” folder. Click on the “Finder’ icon and select “Applications”. Then, search for Mac Space Reviver. If you do find this software, please drag it to Trash. After this, the tool should not bother you anymore, but it could go the other way around. The annoying messages to have more hard disk space can still appear. In this case, it is best to download Combo Cleaner and scan your Mac with this reliable program. It should reveal all potentially unwanted or dangerous files.