Fake Antivirus Update for Windows 10 is a predatory and dishonest marketing tactic for dubious PC optimizers. It’s used to trick people to install stuff they don’t want, like PC Cleaner Pro, by showing them what looks like an official Windows message (it’s not). Fake Antivirus Update is m is adjacent to various adware sites and should not be trusted. 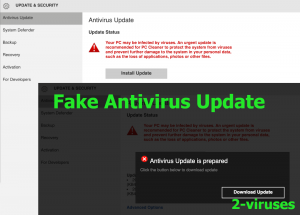 The site that shows the Fake Antivirus Update is not affiliated with Microsoft and should not be trusted:

Why is Fake Antivirus Update bad?

Fake Antivirus Update webpage mimics the look of a Windows security settings page, complete with a pop-up that looks straight out of Windows 10. People who see it can very easily be fooled into thinking that they’re looking at the real Windows system settings. So, whatever this Fake Antivirus Update offers them to download, they may trust it, believing that it’s endorsed by Microsoft. This is extremely shady, manipulative, and dishonest. People don’t deserve to be tricked like this.

Your PC may be infected by viruses. An urgent update is recommended for PC Cleaner to protect the system from viruses and prevent further damage to the system in your personal data, such as the loss of applications, photos or other files.

The pop-up that appears after a few seconds just says:

Fake Antivirus Update doesn’t outright claim that your computer is infected, unlike many other scam sites, such as Windows Security has been Compromised, Windows Support Alert, and the 5 viruses pop-ups,. But that doesn’t make this okay. It’s an obviously deliberate copy of Windows settings, it’s clearly meant to make people trust the page. Windows updates are extremely important for security and this fake update is very scummy in how it steals people’s trust. A similar “you may have viruses” type of ad was used by TotalAV.

Know that fake windows security warnings are pretty common online. They are used by tech support scammers to sell bogus security plans. One of the clearest signs of them and Fake Antivirus Update being fake is the URL of the warning: it never is the official one. Scammers use tricks to make their URLs look legit, so here's a good article on how to spot them. Also, your computer won’t warn you about your security in your browser; it will warn you on your desktop.

If you encounter Fake Antivirus Update, just ignore it and don’t download or agree to anything. Avoid even clicking your mouse anywhere on the page, as it might be programmed to trigger who-knows-what. Just close the browser tab. If you can’t get out of the browser, open Task manager by pressing the Ctrl, Shift, and Esc buttons together and then quit your browser. 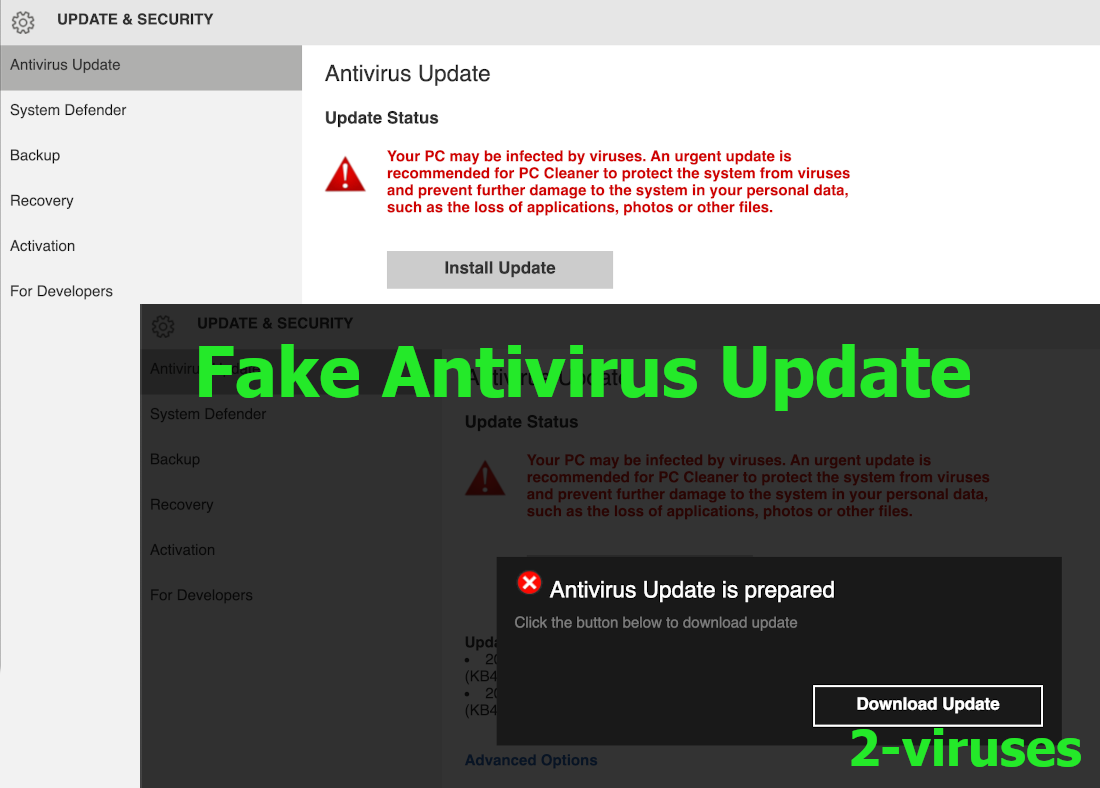 Where is Fake Antivirus Update from?

I suspect that many of the victims of this Fake Antivirus Update prompt have their computer infected with adware. Or that they frequent pirating sites, as those are usually full of malicious ads. Malicious ads, notification spammers, online ad redirects, and similar dangerous sites promote Fake Antivirus Update, along with other scams. Does your browser receive unwanted pop-ups from sites like Message-alert.info? Then visit this article on how to block them.

It looks like Fake Antivirus Update may be used to sometimes advertise Onesafe software. That’s not great. For example, take a look at these VirusTotal pages of their Drive Manager and PC Cleaner. Looking at web analytics, it looks like the Onesafe website gets a good chunk of its traffic from adware sites and shady redirects, so it’s not surprising that it would use misleading ads like Fake Antivirus Update.

How to stop Fake Antivirus Update

One thing you can do to avoid Fake Antivirus Update and other misleading ads is to block malicious URLs. Some antivirus and anti-malware programs have web security tools and can block suspected malicious sites from loading on your computer. This isn’t 100% effective, but it’s a good way to avoid problems online.

You may also want to make sure that:

Many hijackers and adware like Fake Antivirus Update install some of their components as regular Windows programs as well as additional software. This part of malware can be uninstalled from the Control Panel. To access it, do the following.
Fake Antivirus Update facts
Download Spyhunter for Malware detection
(Win)