Wise Care 365 (or WiseCare365) is a PC optimizer that has a poor reputation and is detected as potentially harmful by a few anti-malware programs. The reasons include it offering a memory optimizer, registry cleaner, and a few other features that have been abused by malicious programs before. In the end, Wise Care 365 is not malicious, but it is not all that useful, either. 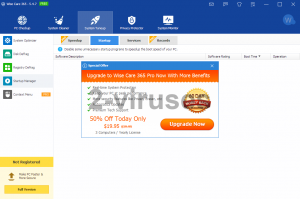 The issues of Wise Care 365 in short:

There are stories online of people who saw their antivirus program stop Wise Care 365 and detect it as malware. The reason is often its poor reputation (files downloaded from Wisecleaner.com range from really bad (32 detections on Virustotal) to almost clean (with 1 or 4 detections). 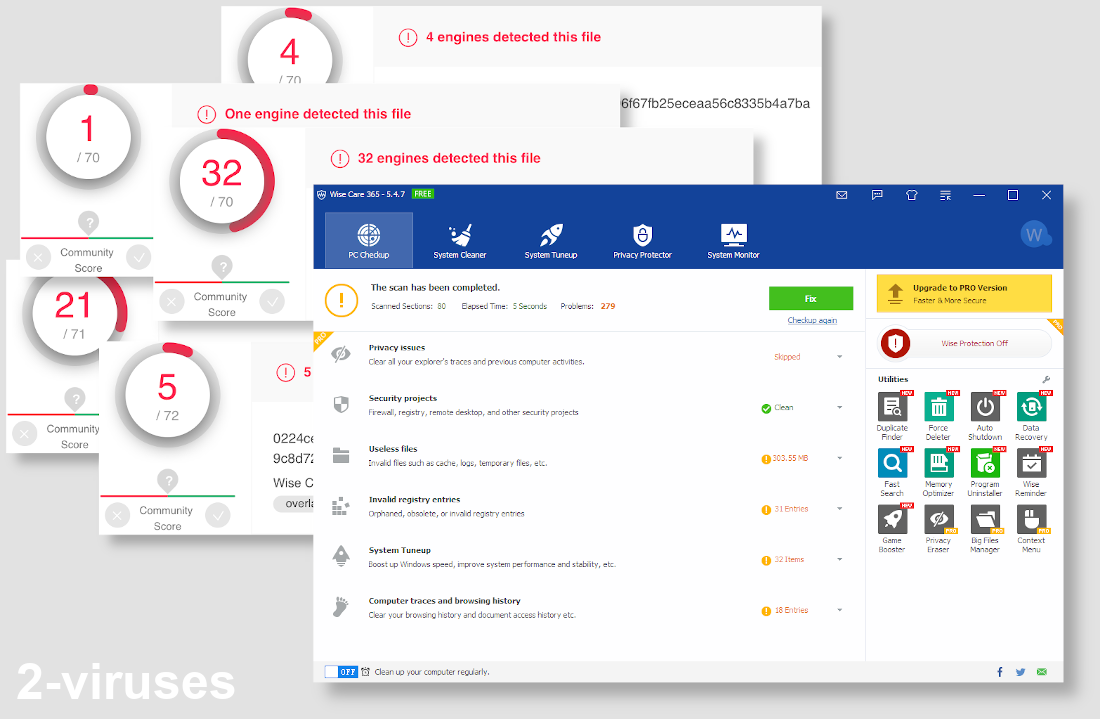 It is no wonder that Wise Care 365 is disliked by security experts. For one, it’s a PC optimizer, which is already a bit of a red flag. Wise Care 365 shares features with fake PC optimizers – features like registry cleaning and registry defragmenting, detecting cookies as “privacy issues”, and toggling various small Windows settings as a “system tuneup”.

A lot of people like Wise Care 365. It’s not that the program is bad, but there are reasons why PC optimizers are so disliked.

First, it’s a registry cleaner and these are not always honest. For example, Wise Care 365’s home page implies that defragmenting the registry can make a computer run faster – which there is no proof of. The registry is just not big enough for a few useless keys to make a difference in speed. Not to mention, it’s saved in multiple locations on a computer, so the idea of defragmenting it doesn’t entirely make sense.

The benefits of registry cleaning are dubious and the risk of harming your system by accidentally deleting important files is too great. That’s why multiple vendors of security programs are so quick to label registry cleaners as potentially unwanted programs. And Wise Care 365 got caught in that. 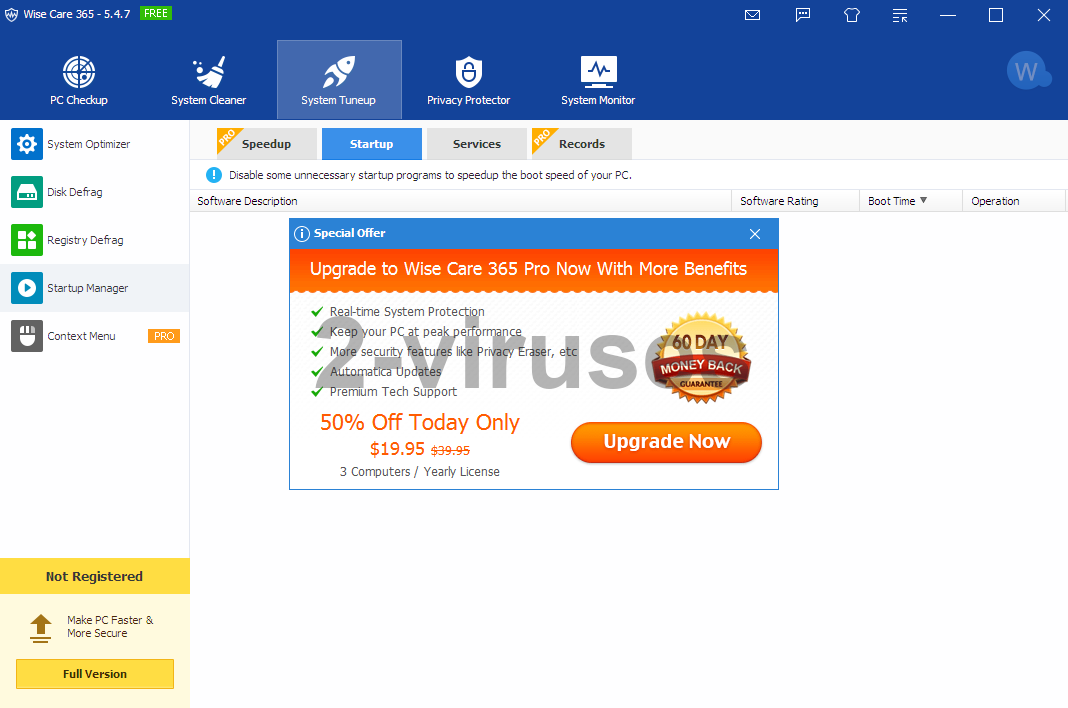 Wise Care 365 also says it will speed up your computer by defragmenting your hard disk. Good news then that Windows already does it automatically for you, generally once a week. Unless you have an SSD, of course, because they will not benefit from defragmentation. Not sure why Wise Care 365 is offering such a redundant function.

Other Wise Care 365’s totally redundant features include a system monitor that is less informative and more limited than Windows’ own task manager and a similarly unnecessary copy of startup manager.

Finally, a problem with Wise Care 365 is that whatever speed it supposedly saves by changing settings and deleting cookies it takes back by constantly running in the background. It needs to be killed in the system tray to completely close. Wise Care 365 leaves a CPU indicator and a memory cleaner quickly accessible – another controversial idea.

How to remove Wise Care 365

Some people fall into a trap of chasing that green checkmark that appears when you let the optimizer to “fix” everything, so if you wish to keep using Wise Care 365, just remember to take its scan results as suggestions and not as gospel. If Wise Care 365 is not compatible with your antivirus software, you can create an exception for it.

Those who want to remove Wise Care 365 can do it using the Control Panel (close the process first), but Pro users would also need to quit their subscription.

We generally recommend performing a scan with an anti-malware program like Spyhunter for those who suspect an infection or got an unwanted program without intentionally installing it, like this person who says that Wise Care 365 just popped up and started annoying them. It did use to be bundled with other programs, so you may have installed it by accident.

Many hijackers and adware like Wise Care 365 install some of their components as regular Windows programs as well as additional software. This part of malware can be uninstalled from the Control Panel. To access it, do the following.
Wise Care 365 facts
Download Spyhunter for Malware detection
(Win)