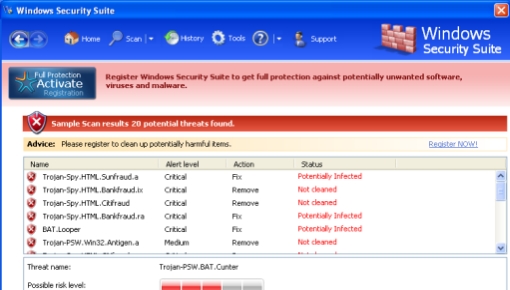 Windows Security Suite is a fake security program, which appears to be a clone of the highly successful rogues Antivirus System PRO and Spyware Protect 2009. Parasites, such as this one are known to use trojans to enter the system, but it is also possible that Windows Security Suite spreads by using a worm. This parasite relies on misleading advertising to trick users into purchasing it’s “licensed version”, which is as functional as the trial.

The home of this parasite, windowssecuritysuite.com, has no relevant information whatsoever and provides the user with lots of completely false information, such as the fact that Windows Security Suite is the best of the best at removing threats. The “awards” are only pictures and there is no contact information, other than a form you can fill out and send into the void. The website itself was created not even a month ago, which would never happen with a legitimate security company.

Windows Security Suite is a scam and should be treated as such: do NOT download or buy it and block windowssecuritysuite.com using your HOSTS file.