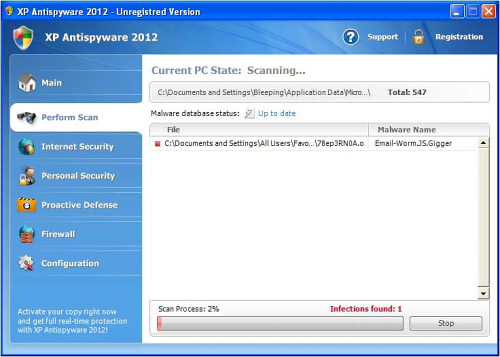 XP Home Security, Vista Home Security 2011, Win 7 Internet Security are new versions of multi -named Rogue Anti-spyware from Braviax family. These rogues are named randomly, depending on Operating System, and have always OS version in the name. This distinguishes them from majority of legitimate software and other rogues.
The names of parasites are as follows:
Note: They can go with year information (2011 in the end) or without.

During install, Win 7 Home security/XP Home security pretends to be a security update for appropriate windows version. It even mimics Automatic updates windows and alerts closely, to prevent early suspicious from the user. Once inside, Win 7 /Vista /XP Internet security 2011 starts its own dirty work. First, it creates its own executable (3 random letters usually) with couple of additional files. Then it modifies registry information to prevent execution of legitimate programs. Lastly, it makes itself known to force users into paying for its “full” version.
First you might notice alerts when you try launching legitimate programs. These alerts look like this:

Although it looks legitimate, most of antiviruses would just disable the keylogger addon from infected IE if this was the case. Thus it is obvious, that this message is false.
Then it starts showing message alerts, claiming that your PC is under attack or heavily infected.

System Hijack!
System security threat was detected. Viruses and/or spyware may be damaging your system now. Prevent infection and data loss or stealing by running a free security scan.

Privacy threat!
Spyware intrusion detected. Your system is infected. System integrity is at risk. Private data can be stolen by third parties, including credit card details and passwords. Click here to perform a security repair.

Stealth intrusion!
Infection detected in the background. Your computer is now attacked by spyware and rogue software. Eliminate the infection safely, perform a security scan and deletion now.

If you press on any of the alers, a scan window will appear that will detect various threats in harmless files. These threats are fake, and should be ignored. Deletion of the listed files by Win 7 Antivirus 2011 might lead to system failure or would require repair install. This parasite will refuse to repair the detected infections without payment, which is a ruse to get your credit card details.
These rogues will block legitimate webpages as well. This is done by adding a proxy server to your browser so you can visit only their webpages or get warning that the site is infected.
It is obvious, that you should remove this Win 7/Vista/XP Security, as it is fake and rogue nuisance. Removal guide bellow.

1. You can use this key to disable majority of popups: 1147-175591-6550 or 2233-298080-3424 . Enter it in its manual registration section. This will not remove all the trojans. We are thankful for Xylitol for this key.
2. Reboot into safe mode with networking, download and run process explorer: https://www.2-viruses.com/wp-content/uploads/PE/eXplorer.exe (backup location). Start it and stop all 3-letter named processes, also processes named like garbage. You might need to edit out registry first.
3. Search for malware files on hard disk and delete them, edit registry OR scan with decent anti-malware programs :  spyhunter, Spyhunter, Malwarebytes Anti-Malware, Hitman Pro
4. Reboot, update your antivirus programs (preferably to internet security versions) and scan again. Make sure you got all the trojans out.

In June 2011, we noticed rogue changing its year number to 2012. Although generally the same parasite, Win 7/Vista/XP Anti-Virus 2012 has a slight changes to its skin and files.
Thus now the parasite names look like this :

Video guide how to remove rogue programs from Braviax family is provided below:

In 2012, Braviax has surprised with one more series with multinname rogues. Nothing much has changed since the 2012 version was released. Here is a list of the infections the were released on regular bases since October 2012.

To get rid of 2013 version of Braviax multiname rogue, follow the instructions below:
1. Start->Run
2. Enter https://www.2-viruses.com/downloads/spyhunter-i.exe and press enter
3. Choose continue unprotected and Save the executable on desktop.
4. Rename the executable to .com from .exe (make sure you see extensions) OR/AND download and run https://www.2-viruses.com/wp-content/uploads/exeregfix.reg
5. Run the executable. The XP antivirus pro 2013 windows should close.
6. Delete the files detected or disable XP Antivirus pro 2013 startup using msconfig.
Remember, that you get such rogues because your current security setup had failed. Running full versions of Malwarebytes Anti-Malware, Spyhunter or stopzilla would have reduced infection possibility.