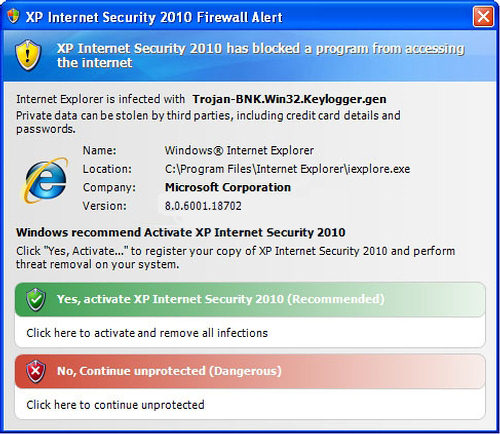 Don’t fall into misleading information about Trojan-BNK.Win32.Keylogger.gen which can be announced to be detected on your machine. In reality, it’s only XP Internet Security 2010, Internet Security 2013 or Win 7 Protection 2013 rogueware which uses such invented threats to make you scared about your Pc’s security. Trojan-BNK.Win32.Keylogger.gen is an imaginary infection, a made-up virus which is expected to push PC users into purchasing XPInternetSecurity2010. Ripping people off is the main reason why all these roguewares are constantly invented because they promise to remove every parasite “detected” on your PC. However, in reality every rogue anti-spyware is useless and even dangerous, so be aware and do not fall into them.

Trojan-BNK.Win32.Keylogger.gen generally appears on fake system security alerts. This imaginary infection is announced for a user to be detected after scanning the system for malware and according to XP Internet Security 2010 if it is ignored, private data might be stolen by third parties, including credit card details and passwords.