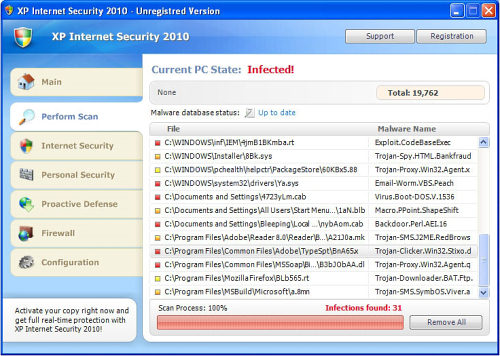 XP Internet Security 2010 (or XPInternetSecurity2010) looks like a really good and reputable anti-spyware that without any request starts surprisingly scanning your computer. However, after some research XPInternetSecurity2010 turned out to be worthless and even dangerous program that seeks to rip people off. It imitates scanning the system for viruses and foolishly informs about active malware detected. Classically, as a solution only the full version of XP Internet Security 2011 is offered for a user and a current sum of money is asked for the possibility to download it. Bear in mind, that XP Internet Security 2010 is known to use the same malware code which is named after the Operating System of the compromised machine. This variant of rogue anti-spyware becomes active only when installed on Windows XP, just like its initial Win 7 Antispyware 2010 which attacks only Windows 7 systems.

When inside the computer, XP Internet Security 2010 starts aggressively running there and firstly blocks all the processes that are expected to launch. Instead of them, this badware interrupts its own malicious code to start its activity once the computer boots up. XP Internet Security 2010 appears with fake system scanners reporting that dangerous parasites such as Trojan-BNK.Win32.Keylogger.gen are detected and also produces fake security messages. What is more, this information is followed by fake alerts telling for the PC user that his computer is at the huge risk and advertisements offering to purchase XP Internet Security 2010 for fixing everything.Don’t follow any of them because the information about various malware detected is invented and  should be ignored.