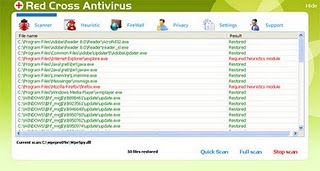 Red Cross Antivirus is one of malwares that all are known to be components of misleading Microsoft Security Essentials Alert. In fact, this fake Microsoft Security Essentials Alert is a Trojan, which gets on board undetected. Since this scam is no particularly different from other ones, it trends to display nonexistent viruses and then offers to install for free one of 35 anti-spywares. In this list of anti-spywares, there are 5 programs that are completely fraudulent and similar to each other with their appearance (GUI). One of them is Red Cross Antivirus.

Once the trialware of Red Cross Antivirus is installed, it acts similarly to other scams, for example Major Defense Kit. This rogue anti-spyware displays exaggerated alerts that attempt to scare user into thinking that his computer is under the virus attack:

The application iexplore.exe was launched successfully but it was forced to shut down due to security reasons.
This happened because the application was infected by a malicious program which might pose a threat for the OS.
It is highly recommended to install the necessary heuristic module and perform a full scan of your computer to exterminate malicious programs from it.

In addition, Red Cross Antivirus starts declaring that it is not capable to remove these detections until so called “full” version is not purchased and installed into the infected machine.

If you happen to encounter such malicious Microsoft Security Essentials Alert, don’t take its viruses reported seriously. Moreover, don’t install and NEVER purchase Red Cross Antivirus. If it happens for you to see its alerts or scanners, remove red Cross Antivirus without any hesitation.