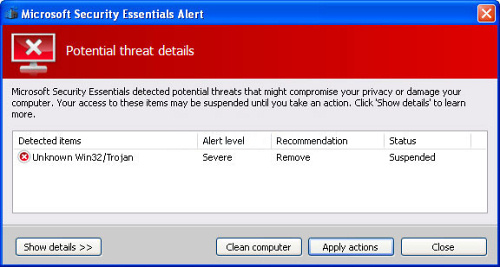 Fake Microsoft Security Essentials Alert is nothing else but Trojan, which tries to convince PC users that they have viruses on their computers and now they need to increase machines’ protection to get rid of the scams detected. For that, users are suggested 35 different anti-spywares where 5 of them are not legitimate ones: Red Cross Antivirus, Peak Protection 2010, Pest Detector 4.1, Major Defense Kit and AntiSpySafeguard.

All this tricky technique starts as soon as Trojan gets inside the system. It begins to display alerts that look very similar to legitimate Windows Microsoft Security Essentials program and then declares that there was a Trojan (Unknown Win32/Trojan) detected. Then, program starts telling that it has no capabilities to remove this Trojan. Users are usually prompted to do an online scan which shows this supposed Trojan as infection with a reason to make them click on a Free Install button.
After clicking, these rogues automatically repeat a “full” system scan which was done earlier. People are similarly told that there is a great variety of viruses detected and now the program needs to be purchased if user wants to eliminate them. This Fake Microsoft Security Essentials Alert starts reporting its alerts as soon as computer reboots and to make you scared reports many legitimate system files, for example:

Warning! Database updated failed!
Database update failed!
Outdated viruses database are not effective can’t guarantee adequate protection and security for your PC! Click here to get the full version of the product and update the database!

The application taskmgr.exe was launched successfully but it was forced to shut down due to security reasons.
This happened because the application was infected by a malicious program which might pose a threat for the OS.
It is highly recommended to install the necessary heuristic module and perform a full scan of your computer to exterminate malicious programs from it.

If you are not able to launch IE, fix the proxy settings of Internet Explorer:

2. Select Connections Tab and then click on the Lan Settings button.

3. Uncheck the checkbox labeled Use a proxy server for your LAN under the Proxy Server section and press OK