Qbit Mac Cleaner belongs to the family of potentially unwanted programs (PUPs) specifically attacking Mac computers. This program is identical to Qbit Mac Speedup and similar according to its actions to Smart Mac Booster, Mac Cleanup Pro and some other fake system optimization tools targeting Mac OS X. These are several specific features of these programs that are in common: 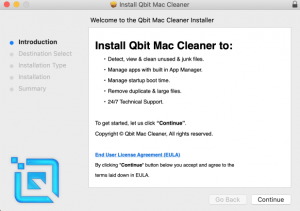 Qbit Mac Cleaner basically does not care about making your Mac free of malware. The application is simply not able to perform any valuable feature of system optimization. Its only mission is to provide you with faulty information about the status of your Mac in order to make you eventually buy the so-called full version of the program, which is not different from the trial one. Promotion through bundling with free software is another characteristic secular to Qbit Mac Cleaner that is a valid reason to consider it as potentially unwanted software. The program uses various tricks to force you to install it. For example, the information about Qbit Mac Cleaner being included into the freeware installer may not be clearly mentioned during the setup process. What users typically see is the window with the default installation description. However, clicking on the “Advanced” or “Custom” option may reveal that Qbit Mac Cleaner and other third-party software is additionally included. To prevent its installation, it is important to uncheck the boxes responsible for these additional programs. However, according to the research and reports rom many users, Qbit Mac Cleaner was still installed even when they did not authorize it.

Qbit Mac Cleaner may also be interconnected into fake Adobe Flash Player update installers. You may unexpectedly notice several repeats warnings through your browser mentioning that there is some “recommended” update of Flash, Video Player or other software. Of course, this information is absolutely fake and it is not related to any official Apple software update. When some users mistakenly agree with that misleading proposal and install the pseudo-Flash Player, they install to give the permission for injection of Qbit Mac Cleaner and other unwanted programs (when they specify their administrator password during the installation). Finally, Qbit Mac Cleaner may be promoted through the adware already within your Mac. For example, MyShopCoupon and MyCouponSmart are the adware apps targeting many Macs today and causing unwanted browser redirection to the websites involved in online scam. They may lead you to a specific page designed to scare you into thinking that your Mac is infected with serious viruses and mentioning that you need to download some tool to fix the issue immediately. This is the leak through which Qbit Mac Cleaner is eventually installed.

There is no valuable function in Qbit Mac Cleaner that would make it a decent software. Instead, the program permanently distracts you by its annoying pop-ups reporting fake threats and instructing you to buy its full version. It performs several amendments into your system to be started automatically with Mac. They immediately it initiates its fictitious scanning that lasts only for a couple of seconds. Finally, you see the fake report and numerous notifications instructing you to waste the money for nothing.

Qbit Mac Cleaner is the reason why your Mac functions in an extremely slow manner. As long as the program is active, it will cause a high load on your memory and result in CPU usage. The computer will no longer function in a stable manner. You will be distracted by faulty pop-ups and notifications and will not be able to concentrate on important work. Of course, the program may eventually cause the financial risk for you, since there is no guarantee that the companies who stand behind it will give you a refund after the purchase of its license was made by mistake. The same goes for other products that come from Qbit family – Qbit PC Speedup or Qbit Clean Pro. They all seek to provide useless services and lure some money this way.

How to uninstall Qbit Mac Cleaner

Getting rid of Qbit Mac Cleaner is done in a manner similar to removing other unwanted software. Please follow these steps:

The steps above should be effective for complete removal of Qbit Mac Cleaner. However, there is no guarantee that other unwanted software will also be deleted. The problem is that some malware attacking Mac OS X may be concealed deep in the system without the possibility of being visually identified. We recommend that you perform a thorough Mac checkup with the assistance of either Combo Cleaner to help you identify other problems and fix them in an automatic way.