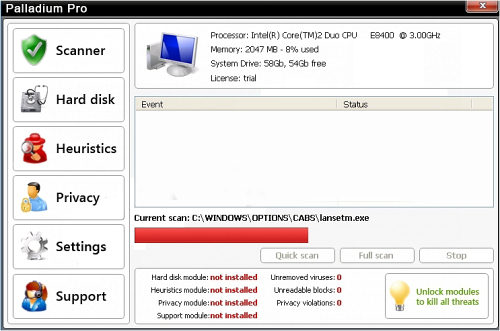 Palladium Pro is freshly released malware which was noticed to be copying earlier released trickily designed Fake Microsoft Security Essentials. This scam will also display Microsoft Security Essentials alert for making you think that your computer is infected and then will definitely offer you to register its fake license. Be aware that if you pay for Palladium Antivirus, you will simply share your money with scammers who may even steal your credit card details. Remove Palladium Pro without any delay!

Palladium Pro reaches computers through trojan viruses, so PC users can hardly do anything about it. However, if you have anti-virus and anti-spyware softwares that are updated constantly, you may avoid such malwares secretly installed on your machine. Additionally, Palladium Antivirus’s intrusion into your PC is always followed by dropping harmless files that later will be detected as viruses and making some changes to Windows Registry of the host computer to launch everytime your PC is rebooted. The modified Registry will run executable of this malware without asking and you will find yourself interrupted by numerous popup ads and scanners. All these messages of Palladium Antivirus Pro are usually telling the same lie about low security guard of your PC and tons of viruses that should be uninstalled. Note, that these detections are earlier created files that do not pose any harm. Malware will claim something like this:

Reporting something malicious which is not there is a part of the malicious campaign of Palladium Pro and most of other malwares that all shouldn’t be followed. Remove Palladium Pro ASAP because it will continue its annoying activity and will also increase the additional risk to your PC, like promoting other computer viruses into your system.

Special NOTES for the removal of Palladinum Pro: When you find your PC infected, instead of a normal screen of start up, you will see a start screen with a Palladinum Pro logo. Instead of pressing one of its offered “Normal Startup” or “Safe Startup”, launch Windows Task Manager (ctrl+alt+delete) and stop palladium.exe process. Windows will ask if you are sure about this, so you should also press Yes. Additionally, you will see a blank screen with Task Manager running, so to return at your Windows desktop click the File menu, run New Task, write explorer.exe into the Open field and press OK. Now update your anti-spyware (spyhunter or Malwarebytes Anti-Malware are recommended) and run a full system scan.

﻿According to malware researcher S!Ri, you should also create a sold_pal file in %APPDATA% to register Palladium Pro and to simplify removal procedure. However, this will not remove Palladium Pro on its own, but it will stop it from blocking everything one launches.