MSASCuiL is a program for displaying the Windows Defender notification icon. If you can verify that it’s the real Windows process, then that’s what it is. However, cybercriminals have stolen the names of genuine Windows processes before, and MSASCuiL is no exception. If you have MSASCuiL malware, then that should be removed as quickly as possible. 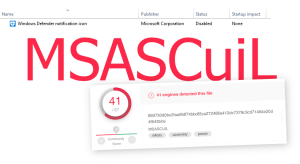 Unfortunately, MSASCuiL, Svchost, and other legitimate Windows processes and files have had their names stolen by cybercriminals. Often this sort of malware is a crypto miner that slows down your computer by hijacking your CPU or GPU.

If you suspect your version of MSASCuiL to be fake or a part of malware, you should perform a few checks.

First and easiest – you can scan your device with an anti-malware tool, such as Spyhunter or another trusted program.

MSASCuiL is relatively new and meant for Windows 10. Users of Windows 8, 7, and earlier systems should be suspicious if they see this file on their computer.

If your MSASCuiL is located in C:\Users\user\Appdata\Roaming or another unusual folder, that’s a bit suspicious.

You can check suspicious startup items with Autoruns. You can right-click on the suspicious process in Task Manager and choose to Open file location. If you don’t trust your anti-malware tool, use a service like VirusTotal to scan a small individual file. If your MSASCuiL is malware, some security programs will detect it.

If something is strange about your MSASCuiL but not malicious, it might just be corrupted and you can check and repair that using System File Checker. 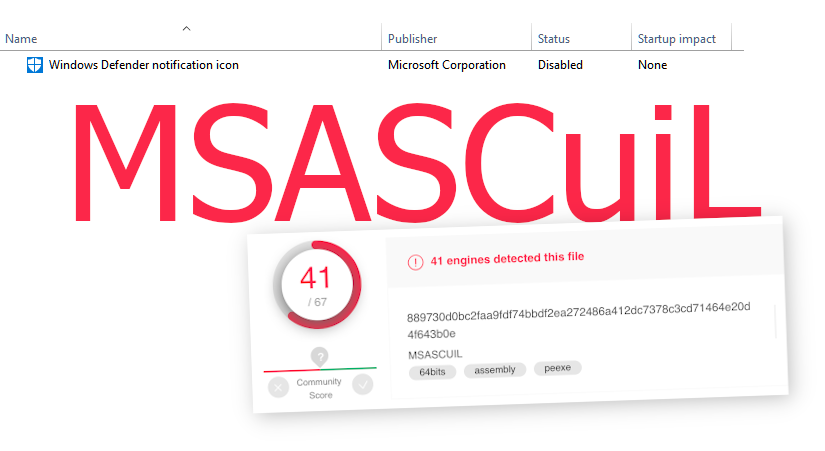 If your computer is infected with MSASCuiL malware – that is, malware that was named “MSASCuiL” to avoid detection – then you must have noticed some malware symptoms. These include:

In addition, some tech support scams use various malware names, real and made-up, to scare victims into thinking that their computer is infected. An example of such a scam is Windows detected ZEUS Virus. If a website or an online pop-up told you that you have MSASCuiL malware and told you to either call a phone number or download some software, ignore that, because it was probably just a scam.

If you have MSASCuiL malware – a malicious file called “MSASCuiL” – it will not disappear if you just delete the legitimate MSASCuiL file. It’s important to keep in mind that MSASCuiL malware and the real MSASCuiL are separate things. If your MSASCuiL is real, just leave it alone.

How to remove MSASCuiL malware

If you think you have MSASCuiL malware and want to get rid of it yourself, we have an article on how to kill malicious processes. Like it mentions, you can use Safe Mode, Process Explorer, and various other tools to troubleshoot your PC. But it should be combined with a scan using an anti-malware program.

Another option is to restore your system to an earlier version, if you made a restore point before you had MSASCuiL malware. You should still complement this with an anti-malware scan, though.

Many hijackers and adware like MSASCuiL Malware install some of their components as regular Windows programs as well as additional software. This part of malware can be uninstalled from the Control Panel. To access it, do the following.
MSASCuiL Malware facts
Download Spyhunter for Malware detection
(Win)