The creators of Apple Security Alert want to convince people that their Mac is in danger. Then they offer bogus tech support services, pretend to fix the made-up problems, and charge exorbitant fees. Don’t fall for the scam. It’s simple to close the fake “Apple Security Alert” warning

If you aren’t sure, go ahead and contact the real Apple support and ask them for help. At least they won’t try to rob you like the scammers do. 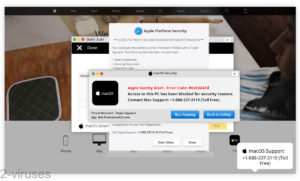 It tries to scare people

There are websites out there that show a warning about your Mac being infected. This warning appears to have Support.apple.com in the background and a text from “Apple Platform Security” in the foreground. It says that access to your computer has been blocked, that it has “Trojan Spyware” on it, that your information (such as passwords) was stolen, and that you must call a phone number that supposedly belongs to Apple Support.

It does not – the phone number leads to scammers, fake tech support staff who try to convince every caller to give access to their computer.

The “Apple Security Alert” page shows a fake scan result. Supposedly discovered malware on your Mac, something called “Trojan Spyware” or “Ads.financetrack(1).exe”. Funny, an Exe virus on a Mac. There’s a very similar tech support scam that targets Windows users. Looks like the scammers just made “Apple Security Alert” without bothering to change some details.

And there’s another scam that targets Mac users that looks like a diet version of “Apple Security Alert”. It seems like scammers keep adding details to make the fake alerts more and more overwhelming.

This makes sense – the point of the “Apple Security Alert” scam is to terrify people so much that they feel like they have to follow the instructions of the alert. Not just with the outrageous claims but with the presentation, too:

Overall, being confronted with “Apple Security Alert” is a very uncomfortable experience. 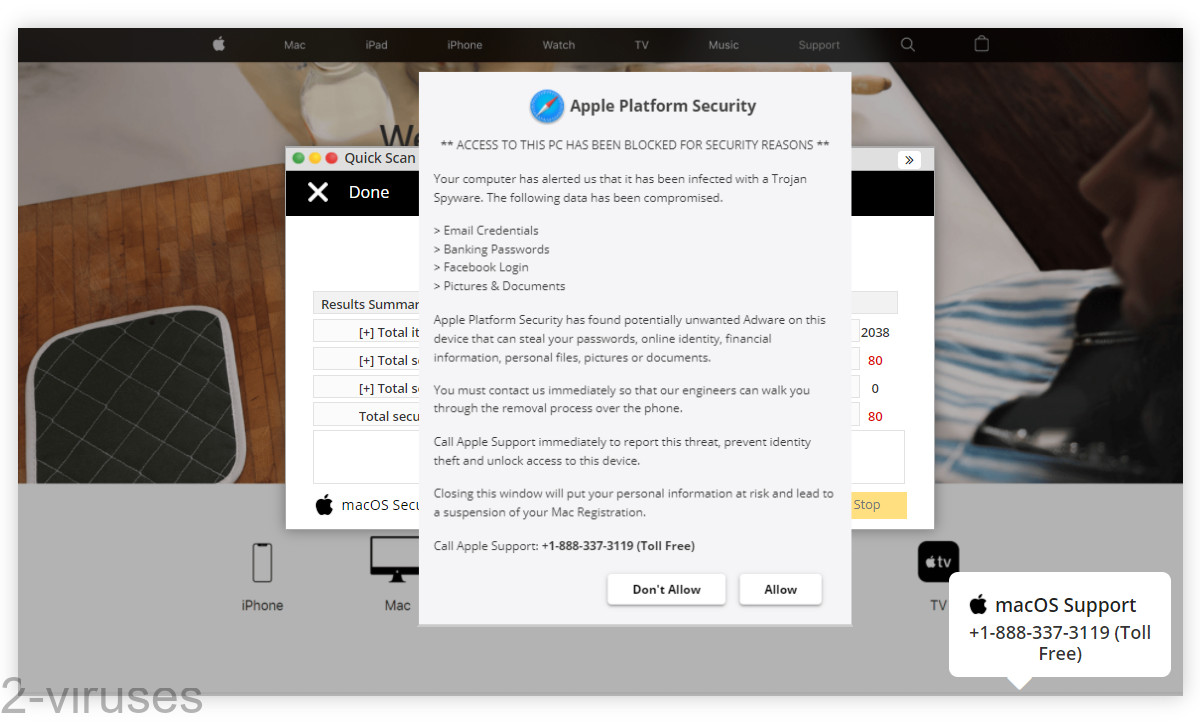 Its goal is to take your money

The “Apple Security Alert” scam threatens that your information is being stolen and that your personal computer is blocked. It says that the only way to fix it is by calling the phone number that it provides.

The fake tech support staff who answer the phone then ask the caller to give them remote access to their Mac. The scammers then take control of the Mac, show some fake error messages and logs, pretend to remove infections, install some shady software, and finally, ask to be paid for their, um, services. Sometimes, the scammers ask for hundreds of dollars.

If the victim refuses to pay, the scammers might mess with their Mac – after all, they do have access to it.

It’s not just the victim’s money that’s in danger, but also their personal information that comes with payment info. The scammers can’t be trusted to respect anyone’s privacy.

Indeed, some tech support scammers search their victims’ Macs for text files that might include passwords and other sensitive information. 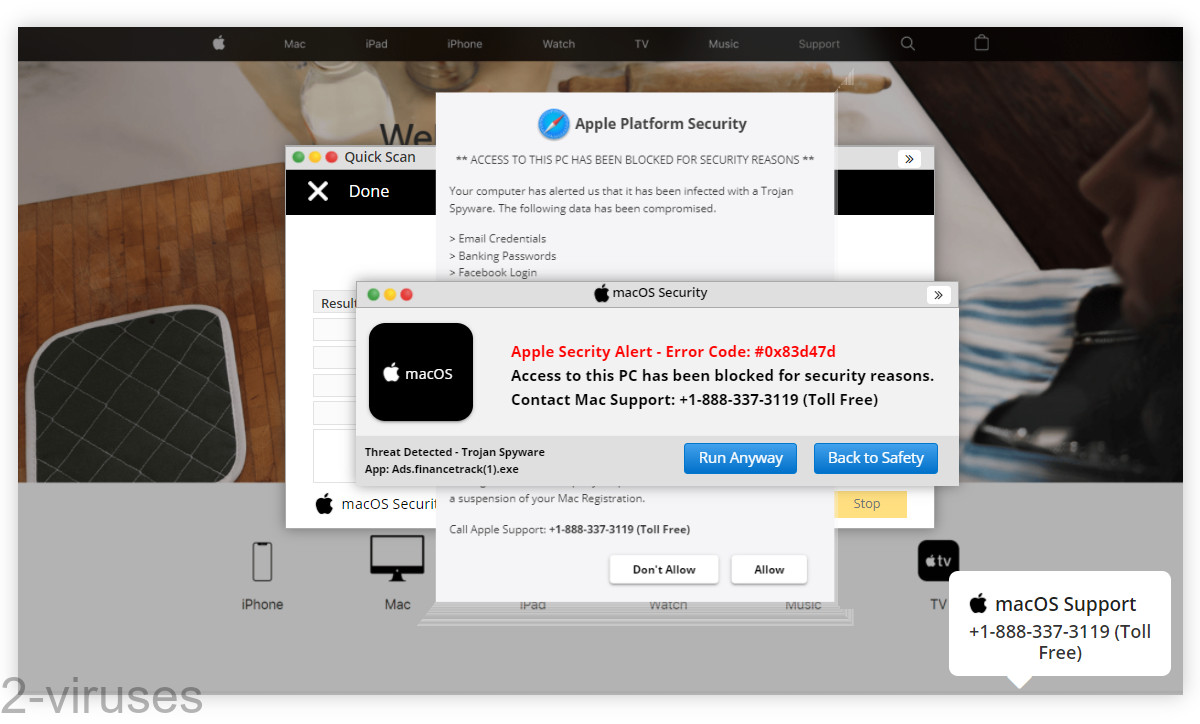 How to avoid tech support scams like “Apple Security Alert”

Malicious ads and fake virus warnings tend to show up on controversial websites, such as torrenting sites and free movie streaming sites. So, you might want to avoid them. Or use an ad blocker so that you don’t have to deal with their advertisements.

Of course, fake warnings like “Apple Security Alert” can also appear on inoffensive websites like small forums and old blogs. Malicious actors sometimes infect vulnerable websites with malicious code that causes dangerous redirects and ads to appear. The administrators of infected sites don’t even know that the visitors of their site are being shown malicious ads.

Ad blockers can help, as can malicious site blockers. Some anti-malware programs can block suspicious websites for you.

And when you encounter “Apple Security Alert” or another fake warning, it’s important to know how to close it so that you’re not stuck with this pop-up hijacking your screen.

How to remove malware

Check your Mac for infections with anti-malware apps like Combo Cleaner, Malwarebytes, and others. Manually review your apps and see what was installed recently.

If there’s an adware infection that’s causing malicious ads to open, then anti-malware apps can tell you.

If the scammers behind “Apple Security Alert” got you to install remote access software or other apps, then anti-malware tools might flag them, too.

If you contacted the scammers responsible for the “Apple Security Alert” ads, if you paid them, then you might need to contact your bank, tell them what happened, and ask them to stop the transaction. You might also want to report the scam (How to Spot, Avoid and Report Tech Support Scams).