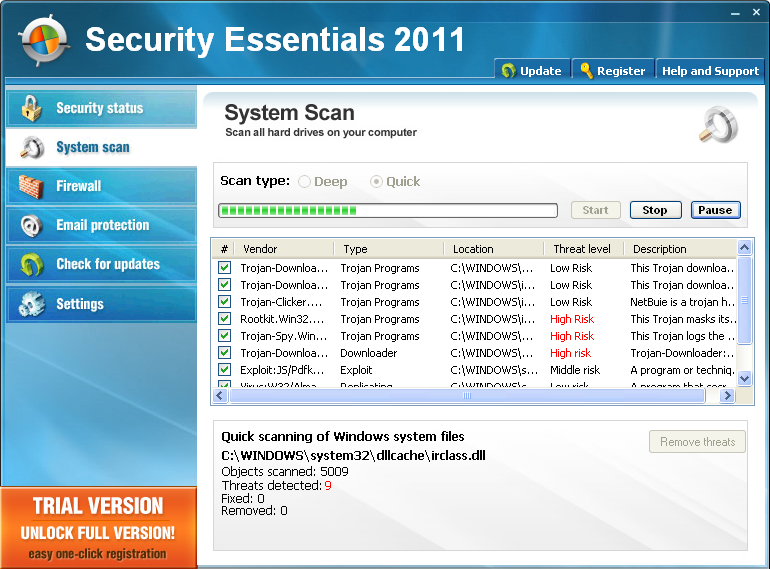 This rogue anti-spyware called Security Essentials 2011 uses forbidden backdoor ways of distribution. That means that most frequently this scam will enter your PC through trojans viruses known to be capable enough to reach the system through fake online advertisements or spam e-mails. Once it settles down with all its files, malware makes some useful modifications to the system, that help to completely disable user from a normal work with his PC. Consequently, malware will start its misleading campaign just after every computer’s reboot and that means that it will display all these fake scanners reporting dangerous viruses. For example:

System warning!
Continue working in unprotected mode is very dangerous. Viruses can damage your confidential data and work on your computer. Click here to protect your computer.

Critical Error
Running of application is impossible!
A problem has been detected and the application has been shut down to prevent changes to your computer. Running of the <process name> is impossible due to the Net-Worm.Win32.Mytob.t activity. Perform the full system scan without delay to solve the issue.

Critical Warning!
Critical System Warning! Your system is probably infected with a version of Trojan-Spy.HTML.Visafraud.a. This may result in website access passwords being stolen from Interner Explorer, Mozilla Firefox, Outlook etc. Click Yes to scan and remove threats. (recommended)

You can temporally disable Security Essentials 2011 by using this key: ISR10F7D9MP3B2A . However, the trojans and rootkits will not be fully removed, thus remove all the files listed and scan with spyhunter to remove infection fully. Full version of Spyware Doctor or Malwarebytes would protect from similar to Security essentials 2011 infections in the future.