The “Apple security breach” scam is dangerous: it causes unnecessary stress, it wastes people’s time, and if the scam is successful, it costs the victim a lot of money. In addition, it can cause malware to be installed on the victim’s Mac. 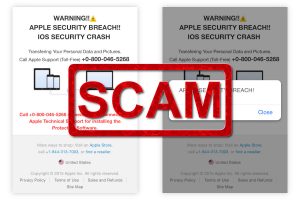 About “Apple security breach” in short:

“Apple security breach” pop-ups are fake warnings that urge people to call a phone number. This phone number leads to a scam tech support center. Scammers try to trick people into asking for tech support so that they can charge people for their services.

The “Apple security breach” scam pages usually appear on iPads and iPhones while browsing the web. They are full-screen messages that look a bit like system alerts.

However, these “Apple security breach” alerts are nothing more than ads. They’re webpages just like this webpage. They’re also not related to Apple in any way.  Apple itself urges users to not believe pop-ups that claim that there’s a problem with your device and to not call the phone numbers provided by these pop-ups (Support.apple.com).

Dangers posed by the scam

The people behind the “Apple security breach” scam want to make money. They want to convince their victims to pay them in exchange for “services”.

Once the scammers have remote access to your device, they can do a lot: steal files, install malware and trojans, etc. They might install fake virus scanners that show virus detections. Overall, it can be a huge waste of your time, nerves, and money.

The “Apple security breach” alerts want you to think that harm is coming to your device. If you’re in doubt about whether your computer, tablet, or phone is in trouble, then contact Apple support directly.

What causes the fake security alerts?

Another option is malicious spam. For example, messages, posts, and comments with links to the “Apple security breach” alert are spread in social media by malicious and hacked accounts. Email spam can also be used for this.

In fact, a few scams aimed at Apple users do primarily spread in emails, such as the unauthorized purchase scam and the account suspended scam.

It is also possible that a malicious app is causing ad spam. While the Apple ecosystem does provide a lot of security, a few malicious apps have been spotted (Wandera.com).

How to deal with the “Apple security breach” scam

To stop seeing “Apple security breach” and similar scams, it’s important to figure out why you’re seeing them.

Check your device for adware apps and browser add-ons. You can use an anti-malware app, such as Combo Cleaner, Malwarebytes, and others. If an adware infection is found, remove it.

If you’ve already checked your device for adware and removed all suspicious apps and add-ons, then the only cause of new “Apple security breach” pop-ups is malicious ads.

You can use anti-malware apps to block malicious websites. Ad-blockers can also help in this. They’re not perfect, they won’t protect you all the time, but they can still help you stay safe from malware online. You might also want to clear the data in your browser (Support.apple.com).

If you contacted the scammers behind “Apple security breach”, if they had you install some software on your device, then it’s important to remove that software from your Mac. You can also use anti-malware programs for this. After that, reset your passwords to protect your accounts.