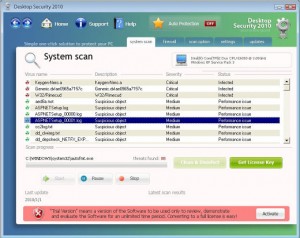 Desktop Security 2010 is one of those “professional” anti-spywares aiming to fool PC users into purchasing them. Other examples that can be marked out are Security Tool and Antivirus Live applications. DesktopSecurity2010 usually surprises PC users by its appearance because it comes unnoticeably with a help of Trojans. When inside, it starts struggling for convincing unaware users that lots of spyware are detected on their PCs. Finally, the “full” version is offered as the only program capable to fix everything and for the installation money is required.

As it was written above, DesktopSecurity 2010 is installed through Trojans infections while you’re trying to update your video codecs. Moreover, free of charge malware scans and spam e-mails may also contribute for this malware, so it is highly recommended avoiding them. It seems that all these malicious means of distribution have been used by scammers more often these days. When Desktop Security2010 gets inside, then suddenly people start getting numerous system scanners, popup ads and notifications, for example:

Security Center Alert
To help protect your computer, Desktop Security 2010 has blocked some features of this program.
Name Sft.dez.Wien
Risk High
Description Sft.dez.Wien is a virus attempts to spread itself by attaching to a host program, and can damage hardware, software or data in the process. This worm can be blocked from firewall and antivirus software.

Spyware Warning
Your online guard helps to stop unauthorized changes to your computer
Details: Spyware detected on your computer

Your computer might be at risk
Antivirus detects viruses, worms, and Trojan horses. They can (and do) destroy data, format your hard disk or can destroy the BIOS. By destroying the BIOS many times you end up buying a new motherboard or if the bios chip is removable then that chip would need replacing.
Click this balloon to fix this problem.

No firewall is turned on
Automatic Updates is turned off
Antivirus software might not be activated
Click this balloon to fix this problem.

As you can see, badware classically announces about severe infections and it is almost right because computer is really has one major spyware inside and that is Desktop Security 2010. However, this malware expects people to become scared and pushes them into purchasing the “licensed” its version.

Please, keep in mind that when ignored Desktop Security 2010 makes the targeted computer to slow down dramatically and initiates constant system failure. Moreover, it affects the machine’s performance and lets more malware inside. Considering all these facts, there is no doubt that Desktop Security 2010 must be deleted. Get rid of Desktop Security 2010 as soon as possible once it is detected on you computer and use a reputable anti-spyware for doing that successfully.

This should disable Desktop Security from blocking other programs and will allow easier removal.

Thank you, Oscar Zelaya for the tip.

Desktop Security 2010 seems to have been updated because now it uses sounds while it seeks to convince users that they need to purchase its fake license. Until now, Desktop Security 2010 has been showing its fake system scanners just like any other malware, but these days it was noticed to apply a lady’s voice trying to announce that there have been viruses detected. Just after Desktop Security 2010 finishes its scan, lady’s voice shouts “New virus found!!” and “Please activate your Antivirus software”. Don’t take them seriously, it is the same rogue anti-spyware which need to be eliminated!