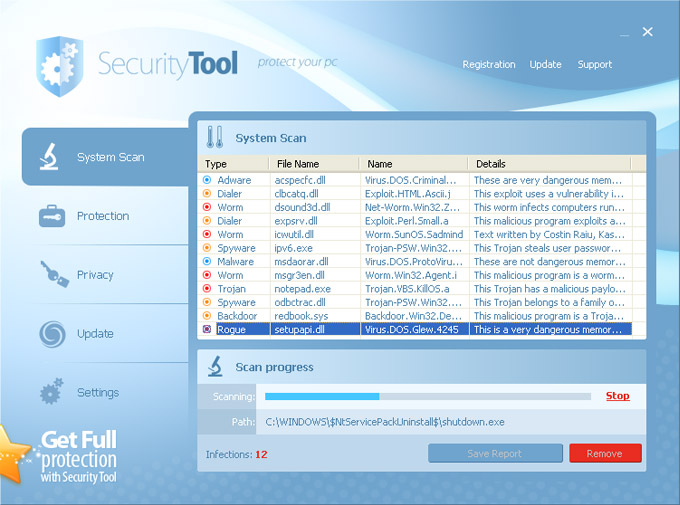 Security Tool is a fake spyware remover with an impressively generic name even in terms of rogue anti-spyware names. This parasite enters the system without the user’s knowledge or consent, usually by employing the use of various trojans. Security Tool might also convince you into downloading it by using the browser hijacker Sitesecuritytest.com, which is a fake online scan. Security Tool uses misleading advertising to trick users into purchasing it’s so-called “licensed version”.

Once inside and active, Security Tool floods the user with popups and fake system notifications, claiming his system is infected and in need of an anti-spyware program. All of these popups lead to the purchase page of Security Tool. Much like any other rogue, Security Tool will also perform fake system scans, which mark legitimate files as threats. To remove these “threats”  you supposedly have to purchase the full version of Security Tool, which is just as fake as the trial.

Typically, the popups inform about various dangerous spyware, for example :

Security Tool Warning
Spyware.IEMonster activity detected. This is spyware that attempts to steal passwords from Internet Explorer, Mozilla Firefox, Outlook and other programs.
Click here to remove it immediately with SecurityTool.

Security Tool Warning
Some critical system files of your computer were modified by malicious program. It may cause system instability and data loss.
Click here to block unauthorised modification by removing threats (Recommended).

Sure, these threats do not exist on your PC, as Security tools scanner is not functional and just a decoy.

Popups aside, Security Tool will also significantly decrease system performance and block certain websites, as well as prevent some applications from running. It is a scam and should be treated as such: do NOT download or buy it and remove Security Tool immediatelly upon detection.

Getting rid of Security tool might be a complex task, as you need to disable its protection against antivirus software. At the moment Security tool allows users to launch processes similar to browser ones, as it needs user to visit its website. We suggest renaming/copying removers as iexplorer.exe or firefox.exe, which should pass through security tools mechanism. Here how to get rid of Security tool:

b) by pressing ctrl+shift+esc right after logging in into windows. go under processes tab, stop all numerical processes.

2. Delete security tool files (see under files in our guide)

b) by searching for filename with same name as processes stopped, if you went for 1.b

3. Reboot, do followup scan with free spyhunter scanner. This will detect any additional problems or files you might have missed.

Alternately, you might want to try one of registration codes for Security Tool to disable it, for example 64C665BE-4DE7-423B-A6B6-BC0172B25DF2 this one. These keys were discovered disassembling security tool and analyzing its gateways by malware researchers at infisecure.com . This will disable various popups and likely to allow running various antimalware tools like spyhunter or malwarebytes to remove the remaining trojans and traces for the system. Full version of spyhunter, malwarebytes or decent internet security suite would reduce risk of Security Tool and similar infections considerably.

Another method to remove Security Tool virus is following:

1. Reboot into safe mode.
2. Launch MSCONFIG and clear ALL startup entries. Do not close window.
3. Search MSConfig entries that reference randomly named folders in C:\Program Files or C:\Program Files (x86), for exampe C:\Program Files\sdgsdgsgsdghs . Delete WHOLE folder
4. Go to your users Application Data folder and delete all executables named by numbers, 2352352.exe or similar. Right-clicking on Security Tool’s icon will show exact place where they are located.
5. Delete all the DLLS listed bellow
6. Reboot Into Safe mode with networking
7. Download spyhunter ( https://www.2-viruses.com/spdoc.exe if pctools are blocked). Do a full system scan. You can scan with other tools like Malwarebytes Anti-Malware, hitman pro. Delete what they find.
8. You can reenable remaining msconfig startup entries
9. Reboot, do followup scans

There are couple other parasites that replace Security Tool and cause havoc in the end of 2010: System Tool and System Tool 2011. They are a bit more aggressive, and their removal differs somewhat.