Apple virus is a generalized term that applies to a variety of cyber threats that affect Apple devices, including Macs. Most Apple viruses are spread through deceptive ads that impersonate Apple by stealing its logos and visual style. These ads trick Mac users into downloading and installing potentially unwanted apps and adware. Malicious macOS apps threaten people into paying for them, steal personal data, fill the web browser with ads, and otherwise disrupt the use of the Mac. 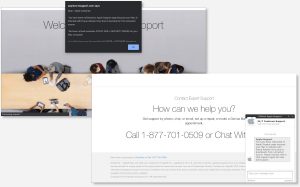 Several years ago, Macs were considered to be much safer than Windows computers. Even now, people say that there’s no such thing as an Apple virus. Unfortunately, Macs are catching up when it comes to malware detected. The reasons include rising numbers of Apple computers and the lack of antivirus adoption on Macs. Cybercriminals aren’t sitting on their hands – they see Mac users as potential victims and develop malware to exploit them. This guide will talk about the symptoms of real Apple viruses, list a few examples, and show the infection strategies that criminals use. We’ll also talk about fake Apple virus warnings that are used by scammers.

In short about Apple viruses:

How to establish a real Apple virus on your Mac?

The word “virus” here is used colloquially and refers to a variety of Mac issues. The problems that people experience when attacked by Apple viruses include these:

The list above is not exhaustive – Apple viruses may cause other symptoms, too. One of the more serious recent Mac infections was the Shlayer trojan, which was very widespread and could result in all of the symptoms listed above, and more. Another typical example is Smart Mac Booster, a fake security program sold by scammers after they scare people into thinking that their Mac is infected. Meanwhile, some of the smallest Apple viruses are various browser hijackers and notification spammers.

Your Mac behaving unusually, even if it’s just a few pop-ups, is a valid reason to investigate it for malware with a reliable security program. Apple virus infections can hurt your productivity and even steal your data, so it’s important to get rid of them ASAP. At the same time, it’s important to recognize fabricated threats like those described in the following section.

Online criminals work hard to trick as many Mac users as possible. Cybercriminals’ main mission is to make money, for which they employ fraud, scams, and other illegal means. The most frequent scam is to impersonate Apple. That allows fake Apple viruses to gain people’s trust and do pretty much anything they want: 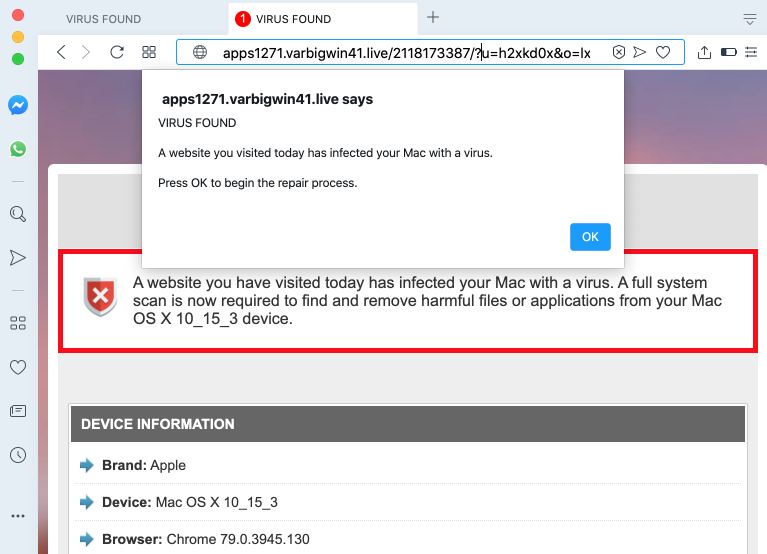 Fake Apple support sites and pop-ups that tell you that you’ve got a virus on your Mac are used by cyber frauds to hunt for victims. Sometimes the name of the Apple virus is totally made-up, like Bankworm or Tapsnake. The Apple virus scams may be entirely digital, or they may include a helpline with scammers on the other end. The fake tech support sites abuse Apple’s copyright and lie about being the official Apple support. Luckily, we can recognize a fake Apple virus by a few features:

Such fake Apple virus warnings tend to appear alongside other unwanted ads, pop-ups, and redirects. Your browser’s home page and default search engine may have been set to some strange website you’d never heard of before. Rather than an Apple virus, this situation is closer to a scam. Nevertheless, scams are very dangerous and can cost hundreds or even thousands of dollars to the victims. 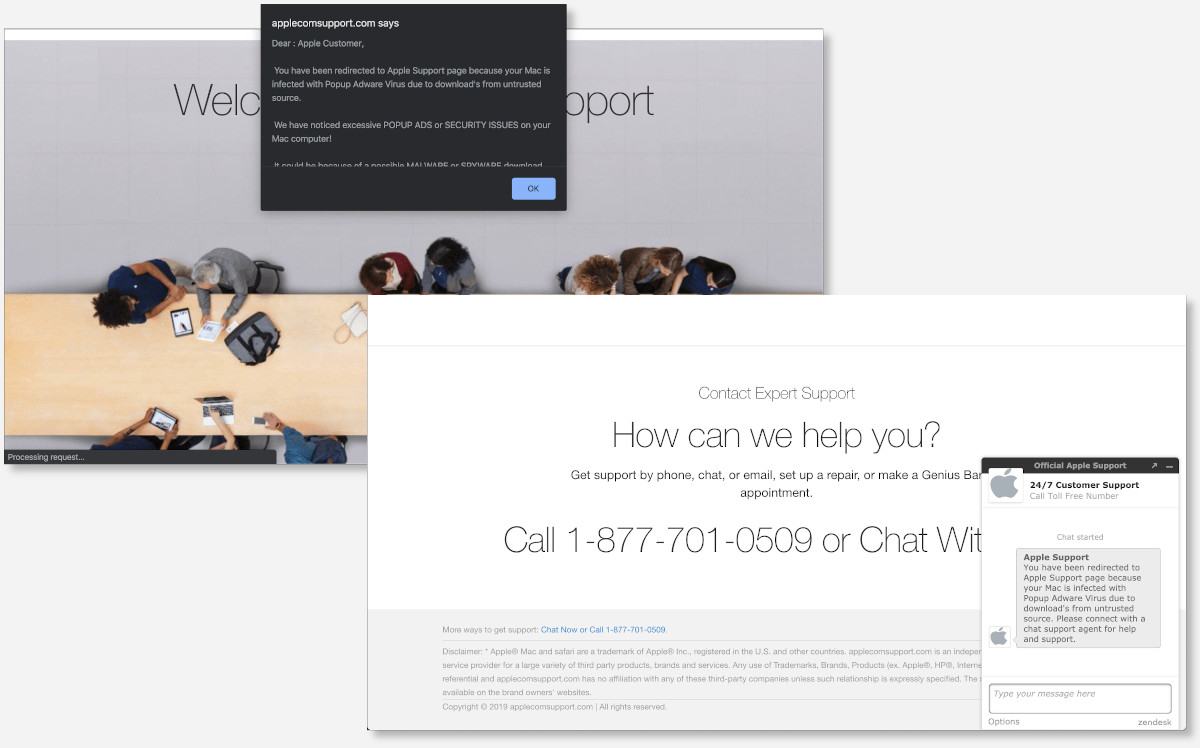 In reality, Apple’s technical support site is Support.apple.com, its only tech support phone numbers are the ones listed on this page. Apple support does not call you first, does not threaten you, does not ask you for your login credentials, and does not push you to install anything.

How to secure your Mac from Apple viruses?

Right not it’s a good time to establish the true security status of your Mac. How to find out whether your device is really infected with adware, browser hijackers or even more serious malware that can be referred to as the Apple virus?

Before we lay out the steps to detecting and removing Apple viruses, let’s explore how to keep a Mac safe. First, your caution matters a lot in avoiding malware. You ought to be careful not to visit suspicious websites and not to download cracked software, and to be careful of pirating. Pirated apps and even legal freeware often bring real Apple viruses and potentially unwanted apps with them. Also, don’t install software updates from random webpages because they’re usually fake. Here’s an example of a fake Flash Player download: 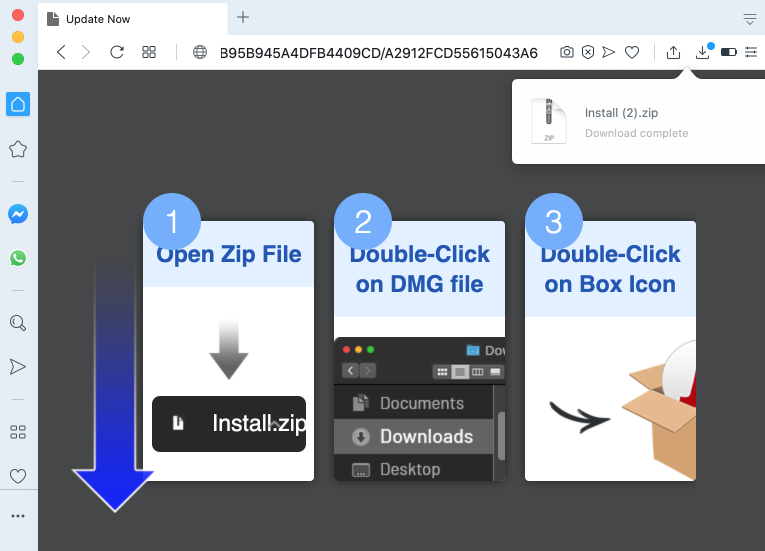 When you proceed with such a “recommended “installation and double-click on the box icon, the third-party downloader will pop up and instruct you to provide the Administrator password. Then, a lot of junk programs may be installed and gain control over your Mac. No doubt, you may soon experience complex problems that may be generalized under the term of “Apple virus”.

As long as you don’t run that downloaded installed, you’re safe. If you’re in doubt, you should scan it with an antivirus program that you trust, such as Combo Cleaner, Malwarebytes, etc. For small files, you can also use online tools like Virustotal.com.

Apple viruses infect Macs, steal personal data, fill the browser with ads, and slow down the computer. Fake Apple virus warnings are used by scammers to spread malware and to manipulate people into paying money and revealing personal data. Real Apple viruses and Apple virus scams are often intertwined. To avoid them, it helps to use an antivirus program to block malicious sites and ads, as well as to scan suspicious downloads.

If you find yourself in the middle of a scam, shut down your computer. If you revealed any banking data, contact your bank. If you revealed your passwords, change them. Consider reporting the scam to the relevant authority in your country and to Apple.

To investigate the true picture of what is going on with your Mac right now and whether there’s any sign of a real Apple virus on it, consider scanning your system with the recommended security software as explained below. This method will get rid of true threats and remove any suspicious software that attempts to mislead you with the variety of fake Apple virus warnings.