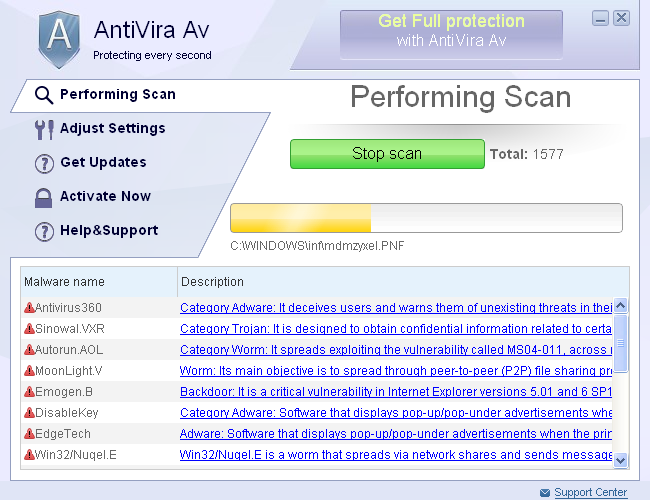 AntiVira Av is another malware that may lead you into thinking that it is legitimate program called Avira AntiVir. Don’t fall into this trick because you will only let malicious intruder inside your machine which additionally will do its best in order to make you purchase its ‘license’. Classically, there is no ‘license’ existing and, just like the earlier released AVG Antivirus 2011 scam, it will let more dangerous cyber threats instead of cleaning the PC. AntiviraAv hails from the same family which should be blamed for creating Antivirus.net malware which has infected numerous users. All these unnoticeable intrusions can be avoided but only if you use the ‘full’ version of anti-spyware and anti-virus because they provide the real time protection. So, don’t save on your computer’s security and data existing on it!

To ensure its secret infiltration into the targeted computer, Antivira Av applies fraudulent SEO methods and reaches the targeted computer through the use of Trojans. Additionally, you will start noticing continuous interruptions as soon as you reboot your computer. Instead of launching any process, AntiVira Av starts displaying fabricated system scanners and alerts that all will give you misleading information about ‘dangerous cyber threats’ detected. However, these messages popping up after you launch your system should be ignored and never reacted by purchasing AntiVira Av virus or removing ‘detected’ files. Some of these files may be legitimate your system files, so after removing you may find problems with your computer – it won’t work properly. AntiVira Av will try to mislead you by displaying such alerts:

Antivirus software alert
Infiltration alert
Your computer is being attacked by an Internet virus. It could be password-stealing attack, a trojan-dropper or similar.

Internet Explorer Warning – visiting this web site may harm your computer!
Most likely causes:
– The website contains exploits that can launch a malicious code on your computer
– Suspicious network activity detected
– There might be an active spyware running on your computer

If you simply ignore AntiVira Av, you will additionally notice numerous extremely annoying things, like continuous slowdowns of your computer, interruptions into browsing or even Internet connection problems. Instead of reaching the website you want you may also see:

Windows Security Alert
Windows reports that computer is infected. Antivirus software helps to protect your computer against viruses and other security threats. Click here for the scan your computer. Your system might be at risk now.

Security Warning
Application cannot be executed. The file notepad.exe is infected. Do you want to activate your antivirus software now.

It should be clear that hackers want you to give them your money and that’s why release such scams. They have even designed it to disable all security programs you have and security websites you might want to reach in order to get rid of AntiVira AV. To sum up, these fake pop-up ads should be ignored and another step which should be done for stopping it is taking care of it. That means that you have to remove AntiVira Av which is not what it poses to be. When uninstalling, you may notice that you are disabled from running your security software, so before you do anything, start your computer on safe mode with networking and then launch task manager in order to kill randomly named processes of AntiVira Av. Now scan the system with upfdated spyhunter, Malwarebytes Anti-Malware or any other reputable anti-spyware.

NOTE: During the malware installation process, don’t close the installation window by pressing (X) on such warnings but simply pull them into the corner of your desktop. During that phase (before reboot) Antivira AV does not block other, legitimate programs, so you can remove it by simply running anti-malware scanners like spyhunter. If Antivira AV is installed, you will have to kill its processes first, as it might block execution of scanners.