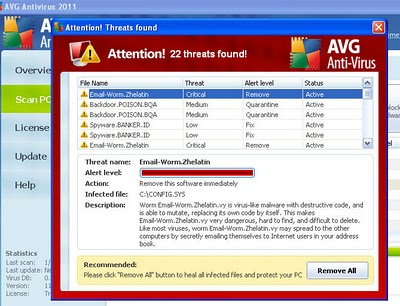 As a rule, AVG Antivirus 2011 (Fake version) starts interrupting into every your browsing session with scanners that are absolute fake. By reporting invented viruses or legitimate your system files, malware expects you to pay for its licensed copy. However, such version is does not even existent as it is designed to increase the income for scammers (Innovagest2000 SL Company). The only way to stop this scamware is to uninstall AVG Antivirus 2011.
Fake version of AVG Antivirus 2011 will start showing various disturbing alerts. These alerts are more detailed or scary than ones of legitimate antiviruses. For example, it might show following :

Virtumode is an adware program that tends to monitor your Internet browsing habits and may display targeted advertisements onto your computer screen. Virtumode may also create a malicious DLL file in order to log your keystrokes and send the recorded information to a third party website. Virtumode is an unwanted application and recommended to be removed.

Warning!
Once installed on your machine, NetPumper may start monitoring your web browsing habits, such as what pages you usually load and what search terms you usually type in the search page. NetPumper may also deliver excessive pop-up advertisements even when you are not browsing the Internet. NetPumper also an ability to slow down your computer performance by using your hard drive recourses in order to deliver advertisements on your computer screen.

As these messages are false, it is better to ignore them. Most parasites mentioned by AVG impersonator are outdated, uncommon or not affecting your PC. The same goes with parasites that supposedly infected all anti-malware programs that you try run to stop the popups:

In order to make you purchase its fake license, AVG Antivirus 2011 (fake) will display such message:

This is a trial version of AVG Antivirus 2011 with limited functionality. To get full version please click ‘Get full protection’ button below.

Your PC may be vulnerable to viruses and security threats. To protect your PC from potentially malicious threats, you need to activate this copy of AVG Antivirus 2011.

Pay attention to this message and as soon as it starts appearing on your desktop scan your computer for AVG Antivirus 2011 (Fake). Just like the earlier mentioned scanners, this Internet Browser hijacking is designed only to make you scared about your machine and its situation. Please, keep in mind that you don’t need to remove ‘viruses’ detected by AVG Antivirus 2011 because these detections may be important your system files. You must remove AVG Antivirus 2011 without any waste of time and also start using legitimate anti-spyware solutions that have a real time protection (“full” version). In order to get rid of this virus, try running a full system scan of spyhunter or Malwarebytes Anti-Malware. If you find them disabled (it’s most likely), launch Safe Mode with networking and then go straight away to stop its malicious processes running.
To simplity AVG antivirus 2011 removal process, I recommend downloading process explorer using this link. It should be used to kill the rogue. If the program is closed the first time, Leave the blocking window on the screen and launch the program again: it will be able to run and stop AVG Antivirus 2011 processes. Then use anti-malware scanners.