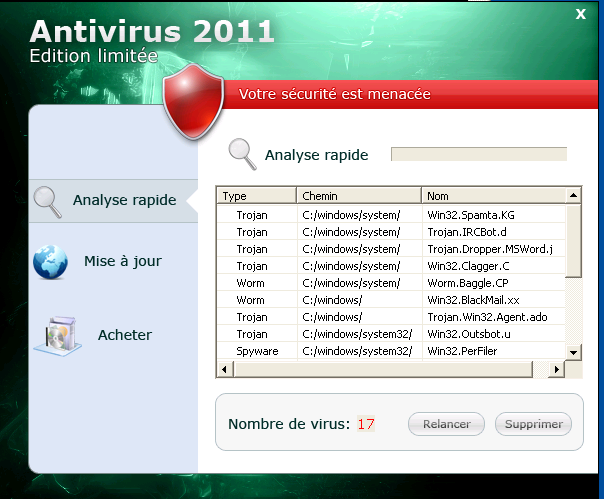 Antivirus 2011 (also known as AntiVirus 2011) is not a legitimate anti-spyware as you may think. AntiVirus 2011 is a rogue anti-spyware which is designed to fool you, trustful PC users, into taking it serious and then steal your money. Haling from a new generation of spywares, program offers for victims to use some basic its functions and then announces numerous infections detected after running a full system scan. Further, Anti-Virus 2011 will keep telling that its unregistered version can’t remove these threats from your computer and will ask purchasing “licensed” its version for fixing everything. That’s how Anti-virus 2011’s brainwashing campaign ends. Don’t feel comfortable after noticing any of its traces because only Anti-Virus 2011 is the virus which must be removed for good.

In general, Anti-Virus 2011 is infiltrated with the help of trojans viruses that look for security holes and after finding some download all the data needed. Then, the same Trojan makes useful configurations to help this roguware launch automatically once the computer boots up and easily display fake system scanners and pop-up ads of its own. Anti-Virus 2011 generates only misleading information about hundreds of spyware detected trying to make users concerned about their PCs. They are completely bombarded by tons of popup ads also reporting “dangerous threat” and finally recommended fixing everything with the “full” its version. Of course, people are misguided about the way how they can remove “detections”. Anti-Virus 2011 will ask people first purchase its commercial version and, moreover, will make some redirections to its official websites for getting a payment much faster.

Anti-Virus 2011 can’t help its victims because there is nothing what needs to be fixed. The only aim of this malware is to rip people off, so delete this application and you will save your money and computer as well. Moreover, hackers may also steal your credit card details, so please contact your credit card details to save your data. While tying to remove Anti-Virus 2011, start Safe Mode with Networking at the beginning of the procedure and then stop its processes and delete the files of this malware for good.

UPDATE!!! A new version of Antivirus 2011 rogue anti-spyware has been noticed these days. This time this scareware can be found in French language and presented as  Antivirus 2011 Edition limitée. Choosing the language according to Operating System found on the targeted PC, this updated version of AntiVirus 2011 will also display numerous of alerts that will report imaginary viruses: