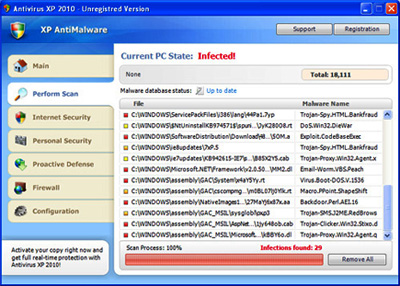 XP AntiMalware is a rogue anti-spyware representing the new generation of rogue anti-spyware applications that install itself as ave.exe executable. Ave.exe starts XP AntiMalware every time user launches any other executable and also generates fake security alerts or scanners for this rogue.  XP AntiMalware is a successor of some other fake security programs like Total XP Security or Total Vista Security that all seek only to push victims into buying this malicious product. However, it is a more sophisticated malware, since it applies this fraudulent earlier written method.

Just like many fake anti-spyware programs, XP AntiMalware comes into the targeted system undetected. The first and most visible signs of having the program on board are multiple annoying pop-up ads and false system scanners that all announce malicious activity on the PC “detected”. In fact, these warnings claim only invented malware and give nothing else but deceitful information. XP AntiMalware also uses deceitful windows that similarly show cyber threats occupying your entire PCs system and finally offer purchasing the commercial its version for their removal.

Do not fall into this persuading that your machine is really under that threat and you need to instal so called “full” version of XP AntiMalware. Before badware hijacks your browser and starts redirecting you to its malicious websites, please remove it mmediately. All you have to do to get a good and reputable antispyware and remove XP AntiMalware, because it will cause much more problems for your PC.