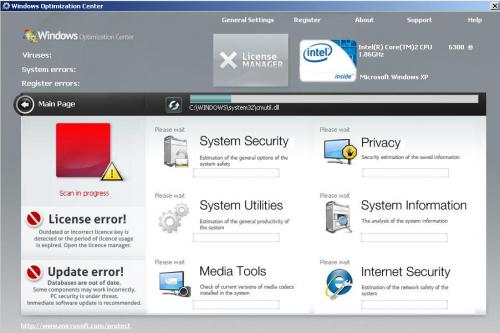 Windows Optimization Center is a malicious program that mostly reaches targeted computers without users’ permission. Being distributed through Trojans and other malware, this rogue anti-spyware is also set to start as soon as computer becomes active and then begin its malicious campaign dedicated for swindling the money. This scam is presented as Operating System fix tool but you shouldn’t fall into this lie – Windows Optimization Center is a true example of malware, following PCoptimizer 2010 and Privacy Corrector.

Virus starts its active behavior without any waste of time and appears on the desktop with deceptive popups telling about tons of malware detected. For example:

Processing Unprotected Startup
Attention! A potential security vulnerability detected due to numerous virus attacks.
Unauthorized access to personal and proprietary information may occur.
Possible hardware-induced corruption with most or all of the file system damage may cause irreversible data loss.

Attention
Software without a digital certificate is detected. System files security is at risk.
It is strongly recommended to enable the security mode.

Critical vulnerability!
Application that seems to be a key-logger is detected. System information security is at risk.
It is recommended to enable the security mode and run total System scanning.

Whatever people are made to believe that their machines are really infected, they are scared into purchasing the license of this rogue. However, it is highly recommended ignoring alerts of Windows Optimization Center because they have no informative value and report harmless viruses. After clicking on Windows Security alerts, you may let more malware inside and also be redirected to commercial websites selling this scam.

It should be clear that Windows Optimization Center is nothing but scamware which will do its best to steal your money. It will show fake system scanners as well, that can be easily predetermined to return fake information about numerous viruses. There “results” should be ignored because some of these files announced as dangerous may be legitimate your system files important for normal computer’s work. Deleting these wrongfully accused files is absolutely unacceptable and may lead to system disruption. So, be sure that you remove Windows Optimization Center because it is created just for fooling computer users. You should remove this dangerous utility as soon as possible before it lets more malware inside.