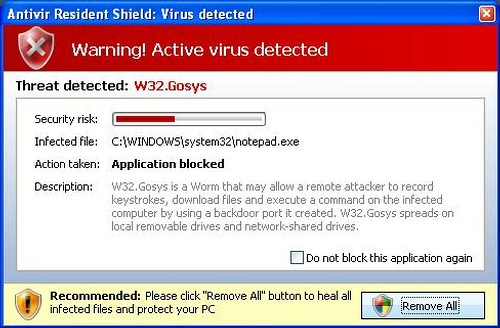 You may get involved into misleading information about W32.Gosys worm detected on your PC. Bear in mind that if you are informed by Antivir anti-spyware about this infection you should NOT follow any suggestion given by Antivir. That’s because in reality it’s just that rogue or the other its variant called Antivir 2010 try to mislead unaware PC users that their computers are highly infected and they need to install nonexistent “full” version for fixing everything.

Antivir and Antivir 2010 both expect them to give their money away, so save your credit and get rid of Antivir instead.
The truth is that just like the scan results “commercial” version does not even exist, so in reality Antivir is the only cyber threat that is recommended to delete instead of W32.Gosys. W32.Gosys is described as a PC worm that sends all your personal information for the hackers. After imitated system scan, Antivir announces about this malware blocked and foolishly recommends its services that are paid, of course.

Keep in mind that if it is detected by Antivir, W32.Gosys worm is not the thing that you should eliminate. Antivir or its other version called Antivir 2010 is the issue that you should pay your attention to. Don’t pay for it in any reason! Just use a reputable antispyware to make sure that all the bogus files connected to Antivir are deleted.