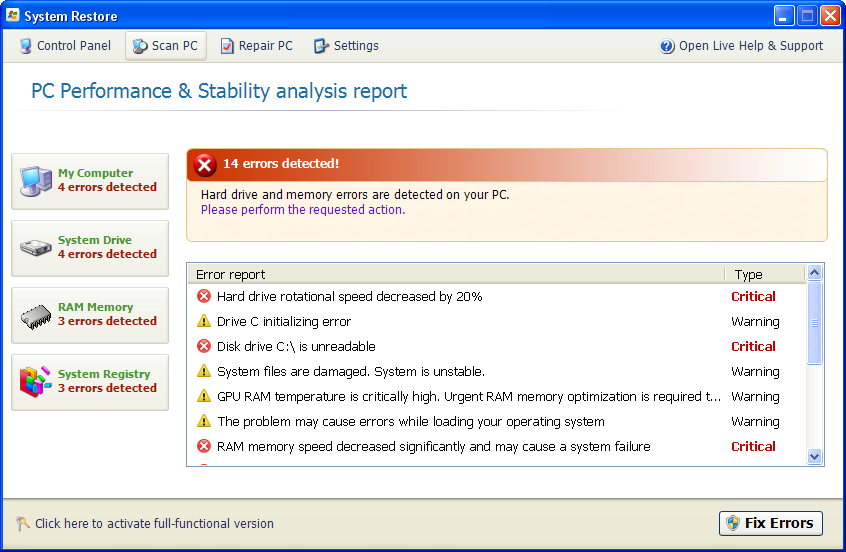 The fake System Restore is a fake PC optimization tool that must be eliminated before it starts messing your PC up. It hails from the same group of scams just like Data Restore or Data Repair that all start misleading their victims about hard drive problems detected once they manage to get inside. If you thought that System Restore can help you to optimize the work of your hard drive, you are wrong. The fake System Restore is named after legitimate MS Windows program that is responsible for rolling back to stable system state. Legitimate System Restore is free program and not related to hard disk problems. If you see window that is asking you to pay, or scans for various problems and is named “System Restore”, then it is likely to be fake one. No matter what it states, you must remove System Restore malware because soon it will ask you to pay for fixing various hardware problems that are not real. Keep in mind that it’s just another fake defragmenter that enters the system with a help of Trojans.

As soon as it manages to get inside the system, System Restore starts announcing about its existence by ‘running’ continuous scanners and alerting about numerous hard drive issues detected. These ‘errors’ that are found on your machine are displayed for the only reason – to trick users and scare some of them as well. After some time, System Restore will ask to pay for its licensed version which will be told to be the only version which is capable to help you in your situation. To trick you into believing that machine is affected System Restore reports:

Hard Drive Failure
The system has detected a problem with one or more installed IDE / SATA hard disks. It is recommended that you restart the system.

The fake System Restore will stop legitimate programs from launching by claiming that these programs are not accessible on hard disk. This is done for 2 reasons: to make its removal harder and to force users to think that your PC needs magic software to fix hardware errors. This software has no such capabilities, it tries to scam you into paying for it.

During System Restore removal, user may also notice that his Internet connection is prevented disabled – that’s the way how this scamware protects itself from being removed from the system. To fix that, you could try fake-registering System Restore using this key : 1203978628012489708290478989147

This should disable this rogue so that you could launch IE and download reputable anti-spyware to remove System Restore. We highly recommend you scanning with spyhunter, Malwarebytes Anti-Malware, Hitman Pro and fix your machine. Note that System Restore may hide some of your files, so if you have such problem read ‘How to view hidden files‘.