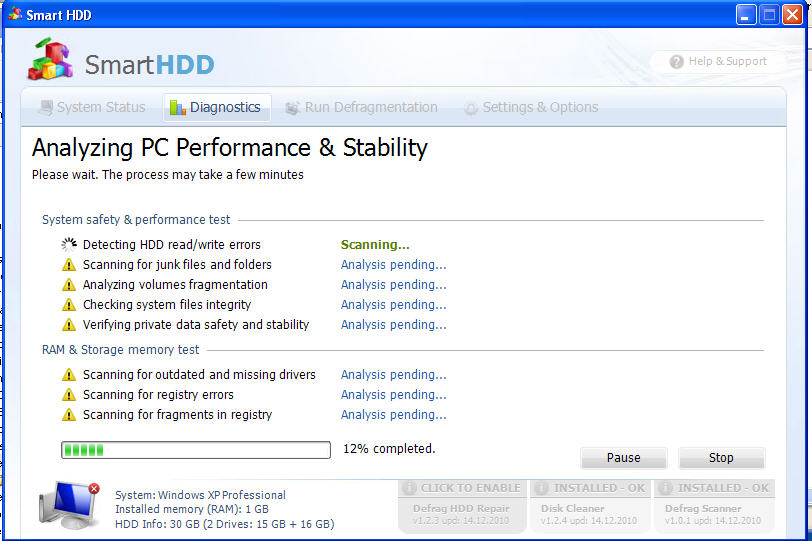 Smart HDD (you can also find it named as S.M.A.R.T. HDD) is another version of fake system optimizers and focusing on simulating hardware failures instead malware attacks or registry issues. A clone of HDD Rescue and Smart Defragmenter, and many other disk defragmenters, this malware was released only a few days after the last one. The internals of Smart HDD are not that different from its predecessors and the way it behaves is about the same. There are several versions of this parasite, the first one launched in late 2010, the second one during April 2012.

SmartHDD enters system through various browser vulnerabilities, trojans and exploits. When in system, it creates several files, typically in %Temp% directory and makes them launch on start. These executables are responsible for various Popups and Alerts that start annoying user.

Smart HDD popups state, that your PC is malfunctioning. Typically, hard drive is blamed, but it can be “bad RAM” or some problems in registry. The popups look like this :

Hard drives diagnostic report
Your computer is in critical state. Hard disk error detected.
As a result it can lead to hard disk failure and potential loss of data.
It is highly recommended to repair all found errors to prevent loss of files, applications and documents stored on your computer.

Windows cannot find notepad. Make sure you typed the name correctly, and then try again. To search for a file, click the Start button, and then click Search.

Surely, all of the popups are fake, but if you click on them, the main window of SmartHDD will be shown and system “Scan” will start. It is way too fast for a real system scan and it will detect about same collection of problems. Each of these problems can be “fixed” for modest price of 60-80 USD. Beware that it is a scam and the system will not be fixed if you pay. They will likely resell your credit card details and continue scam innocent people.

As you can see, you must remove Smart HDD. Removal procedure of this malware might be a bit complicated, as it will stop many programs from launching. Sometimes programs can be started, sometimes not. Typically, Smart HDD blames hard disk failure for this problem, but the fact is that the trojan is responsible for it. To get rid of SmartHDD follow one of our instructions.

You would be much less likely to be infected with Smart HDD and similar malware if you had a malware real time protection like full version of Spyhunter or Malwarebytes Anti-Malware offer.

NOTE: There is a legitimate program with the same or similar name.