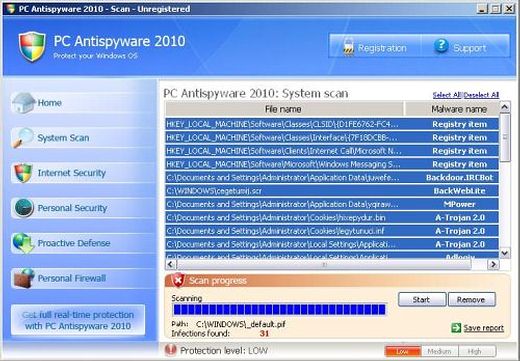 PC Antispyware 2010 is a fake anti-spyware which must be removed as it is detected on your PC. Claiming to solve all the computer problems, PCAntispyware 2010 is not able to remove any kind of virus. What is more, it can become the computer problem by itself.
PCAntispyware2010 acts identically as its predecessors PC Security 2009 or Home Antivirus 2010 and seeks the same goal which is to swindle the money from unsuspecting computer users. Firstly, unregistered version of this software infiltrates computer secretly after misleading websites are entered. Once on board, this rogue displays fake alerts and bogus system scans about the infected files which are actually harmless or non-existent. These pre-arranged reports are designedto come up continuously every time the computer is logged in. The trap is to scare trustful computer user and make him buy PC Antispyware2010 “registered” version. Do not purchase this malicious stuff and delete all the files, connected to PC Antispyware 2010 immediately after detection. All the recommendations are listed below: