Nero TuneItUp is described as a system optimization software that fixes issues associated with system performance. The utility is advertised as the one capable of making the Windows operating system load faster, enhancing the browsing speed, improving the operating system parameters and even updating available applications and drivers. 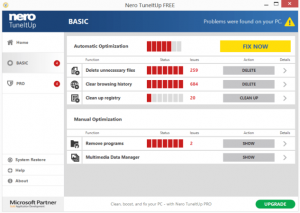 The problem with Nero TuneItUp is that its developers often refer to the method of “bundling” to distribute it. This is exactly why Nero TuneItUp is classified as a PUP (potentially unwanted program). In many instances, people install applications distributed by means of bundling without their direct intention to do that. Nero TuneItUp is similar to Advanced System Optimizer, Qbit Clean Pro, System Clean Pro and some other programs detected as PUPs. This application is not free.

It lets people run a free scan, but to fix any identified problems the requirement is that users buy its licensed version. Currently, there are many PUPs that are elaborated to scare their users with fictitious scan reports. This means that they invent threats that are not real or not inherent to your system. These fake scan reports are specifically produced to make users buy the full version of the PUP allegedly to resolve the identified bogus problems.

Is Nero TuneItUp a legitimate tool 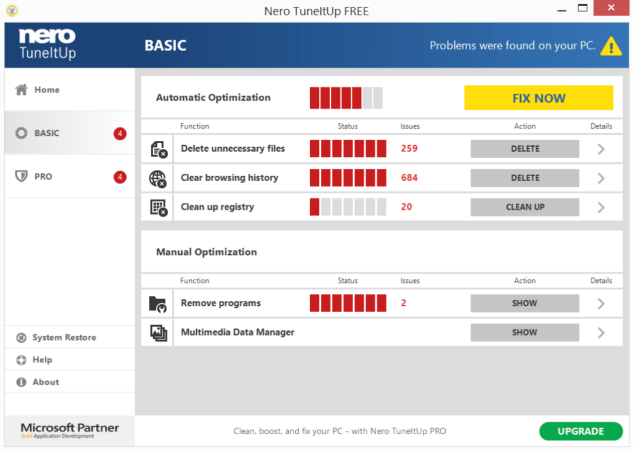 We cannot exactly identify Nero TuneItUp as a PUP that displays faulty information in its scan reports. However, there are many other PUPs and utilities promoted through “bundling” that are not exactly fair with their users. Very often some software developers who refer to “bundling” may additionally include some other additional programs into the installer.

There is a high probability that Nero TuneItUp was installed along with some other unwanted programs like browser hijackers or adware-type utilities. Normally such additional programs contained in the bundle may collect the information about the user’s search queries, geographical locations, IP addresses, search preferences, etc. This sensitive and private information may be shared with third parties illegally. As a result, some cyber frauds may easily manipulate this data in order to generate profit. Some other PUPs, especially adware, once installed, will produce the wide range of excessive pop-up ads, annoying advertisement banners and sponsored links that may lead you to a lot of dangerous content on the web. Such browser redirection issues may eventually infect your system even more dramatically.

Finally, the redirections caused by the adware may lead you to the websites that contain malicious scripts specifically to download other malicious and hazardous utilities. According to the feedback of many people, Nero TuneItUp appeared suddenly on their computers. So, they do not actually remember installing it directly. As mentioned above, Nero TuneItUp could be installed with some other free programs you have been dealing with lately, so it is important to be careful during the installation process to avoid unauthorized third-party software installation.

How to avoid Nero TuneItUp intrusion

Nero TuneItUp was not installed into your PC directly by you, was it? However, most likely you did take part in its installation process while installing some programs downloaded via freeware resources. This means that you ought to be very careful next time when you find some good and free utility on the Internet. Take time to carefully read the EULAs (End User License Agreements).

These are the documents that clearly disclose what other additional applications may be included in the installer. Do not immediately click on the “Next” or “I agree” buttons. Switch to the “Advanced” or “Custom” installation mode where you may uncheck these additional programs from the default installation. Nero TuneItUp may be uninstalled directly by accessing the Control Panel and removing the program from the list of available applications.

It might be necessary that you first end the task of Nero TuneItUp by opening the Task Manager. This should solve the issue and completely delete Nero TuneItUp from your PC. However, we do recommend you to scan your system with Spyhunter because it can identify other potentially unwanted or dangerous software that may still remain in your computer in a concealed form.

Many hijackers and adware like Nero TuneItUp install some of their components as regular Windows programs as well as additional software. This part of malware can be uninstalled from the Control Panel. To access it, do the following.