Dr. Wolf Antivirus is a potentially unwanted program — PUP — and a system optimizer for Windows and Android. This article is about the Windows version. 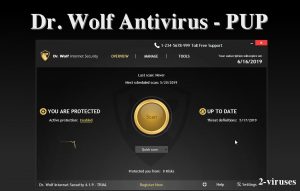 “Dr. Wolf Internet Security” is advertised as a program able to remove some very dangerous viruses and constantly monitor the computer’s security. However, it has earned a reputation for being dishonest — multiple antivirus programs find Dr. Wolf Antivirus suspicious. Dr. Wolf can be grouped with other suspicious optimizers, like Smart PC Care, Secure PC Tuneup, and Tuneup My Mac, as a potentially unwanted program that pretends to be much more useful than it is.

Potentially unwanted programs tend to be mostly useless. As a system optimizer, Dr. Wolf Antivirus has the problem of offering redundant functions, for example, managing startup apps. It boasts that “The virus, spyware and malware database will automatically be updated for free!” which is already expected of any normal antivirus programs. Not that Dr. Wolf Antivirus is a reliable antivirus program, as it seems to flag safe files as false positives.

Another characteristic of PUPs is being distributed in bundles. If you didn’t install   Dr. Wolf Antivirus, but just found it on your computer, it must have arrived with another free program as a promotional inclusion. Dr. Wolf Internet Security is available for download on its own website, but programs like this also use free software download sites, where they are often distributed in bundles. Sometimes promoted programs are included in the installer of the program that you actually want, sometimes hidden in Advanced settings. Some people don’t want to mess with these settings, resulting in the installation of software that they did not ask for and did not know of. So, if you download freeware a lot, you can end up with a lot of bloatware installed.

If you entrust Dr. Wolf Antivirus with your security, you might be putting your computer at risk — this program is not of good quality. For example, Dr. Wolf Antivirus detects StikyNot.exe — a legitimate, though not essential, Windows program. Dr. Wolf Antivirus calls it Emotet. Emotet is a real and dangerous banking Trojan and a backdoor for other malware that’s been active since 2014. After taking the files that Dr. Wolf Internet Security detected as Medium risk malware and testing them with other antivirus programs, none found anything wrong with it. At least it’s good that the Dr. Wolf Antivirus Trial version does not actually remove the “malware” files even after being told to do it, seeing as they’re not actually malicious.

There does exist a Trojan that antivirus programs detect as Emotet and which masquerades as StikyNot. However, despite the files having the same name, the files are different. Does Dr. Wolf Internet Security only check file names and not the files themselves? So, to test Dr. Wolf Antivirus’ abilities again, I downloaded a real malicious file, one that most serious antivirus programs detect — a Trojan that abuses your system’s resources to click on ads in the background. Dr. Wolf Antivirus did not see anything wrong with this file. 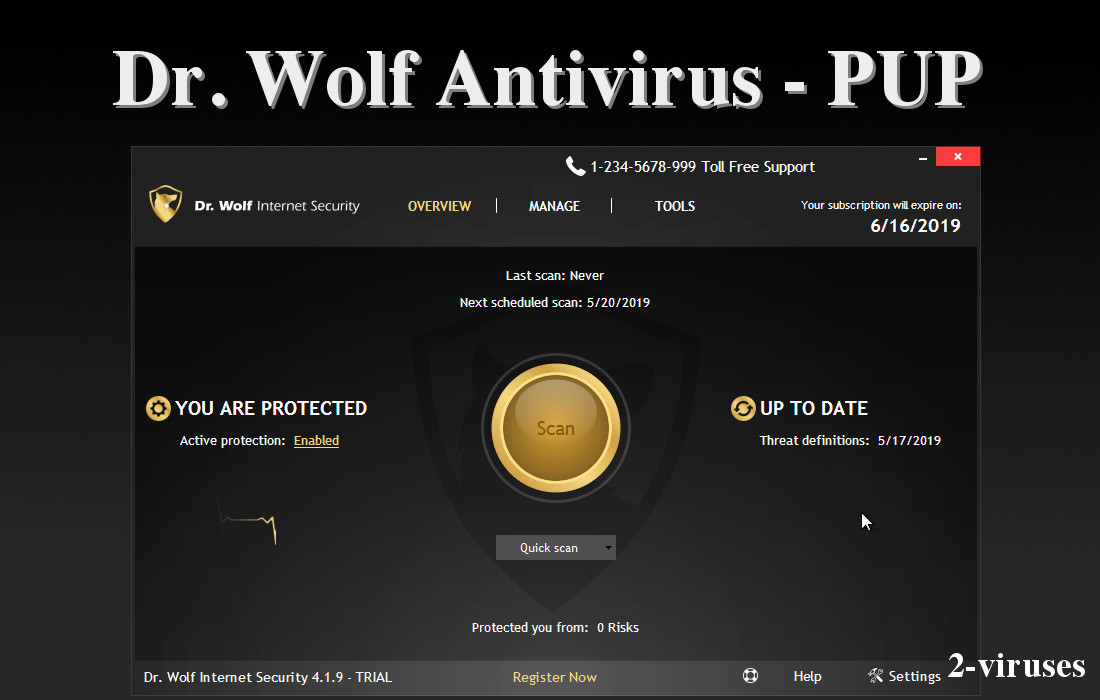 Microsoft has tremendously improved Windows security in the last few years. They provide users with tools to remove clutter, detect malware, create file backups. Third party optimizers should be considered very carefully before installing them. Some of them, like registry cleaners, risk harming the computer without offering any value. Some try to monetize functions that are already available, like cleaning junk files.

Tremendous resources are required to create an antivirus program that is accurate and reliable. New, unheard of programs should be researched carefully. Even older antivirus apps should be monitored. A list of reviews of computer security tools is available on our website if you’re curious.

Many hijackers and adware like Dr. Wolf Antivirus install some of their components as regular Windows programs as well as additional software. This part of malware can be uninstalled from the Control Panel. To access it, do the following.
Dr. Wolf Antivirus facts
Download Spyhunter for Malware detection
(Win)