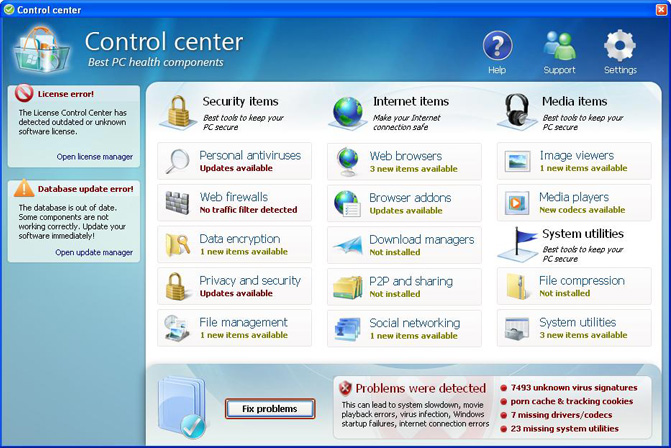 Control Center is a new rogue program, which pretends to be an all-in-one security application and system optimization tool. The reality, however, is much sadder than that, and it would not be an overstatement to say, that Control Center is basically money for nothing. Control Center uses downloader trojans and drive-by downloads to enter the system. The trojans are usually disguised as flash updates or codecs online, but may come in various other ways as well. Much like any other rogue, this one uses misleading information to trick people into purchasing it’s “licensed version”.

The tactics of Control Center are nothing out of the ordinary: this parasite displays popups and performs fake system scans to convince users that their system is infected, and thus get them to purchase the so-called “license” of Control Center, which is supposedly able to rid the system of infections. Not only is this assumption wrong, the assumption that this is based on, is also wrong – Control Center does not posses the ability to detect infections, let alone remove them.

Like most modern rogues, Control Center protects itself from removal by blocking legitimate security software, disabling helpful system services, such as System Restore, Safe Mode, and Registry Editor, and hijacking the browser. This program is a scam and should be treated as such: do NOT download or buy it and remove Control Center as soon as possible.