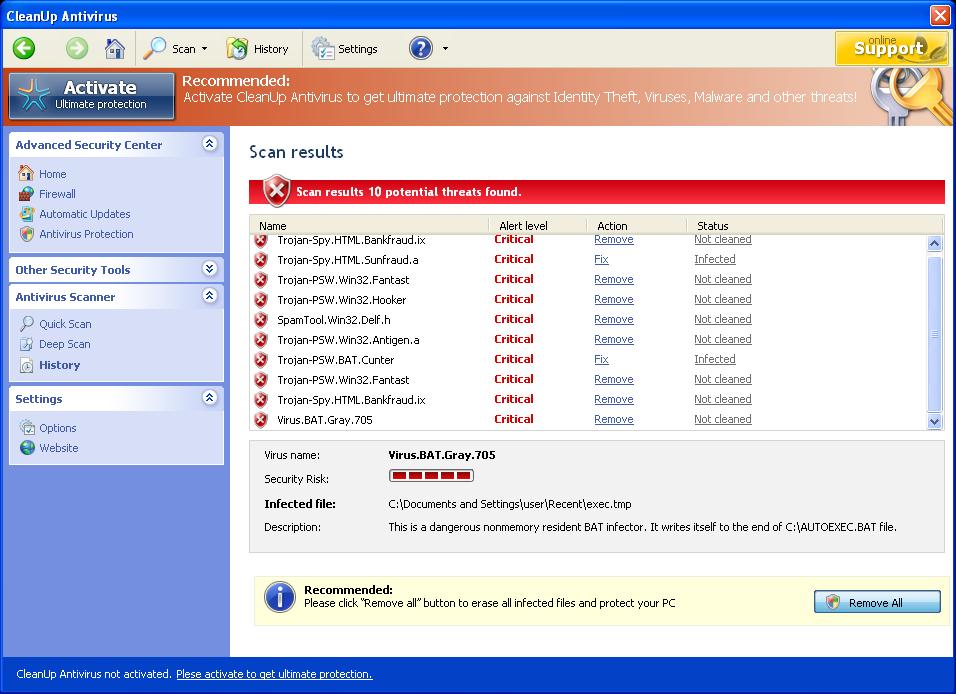 CleanUp Antivirus is a totally fake security program which was created only to rip PC users off. Clean Up Antivirus imitates the actions of a normal anti-spyware and includes system scanners, security notifications and alerts to convince victims even more. Keep in mind that these messages announce only invented threats, so they shouldn’t be taken serious. Just like its relative program Security Antivirus, CleanUpAntivirus must be removed from the system as soon as possible and a reputable anti-spyware is recommended for doing that successfully.

In the beginning, CleanUp Antivirus invents some registry entries and randomly named files which drops in the system. This scamware starts scanning the system as soon as computer boots up and labels the same earlier mentioned files as infections. Clean Up Antivirus just like a normal anti-spyware program additionally loads pop-up ads and notifications that announce critical level of PC security. These messages are quite annoying but convincing though, so additionally buying a full version of the malware is suggested for the users. In truth, CleanUp Antivirus seeks to make people concerned about their PCs security and expects to ripp them easily off. Don’t fall into taking its harmless files serious and remove the same CleanUp Antivirus instead.

You may be surprised after seeing Clean Up Antivirus on your computer because it seems to appear from nowhere. For its distribution, badware uses Trojan horses that come through security vulnerabilities found. So, when you remove CleanUp Antivirus make sure you delete all its additional malware as well. You won’t find it on Add/Remove Programs list, so start safe mode with Networking and further delete all its files from the removal guide written below.