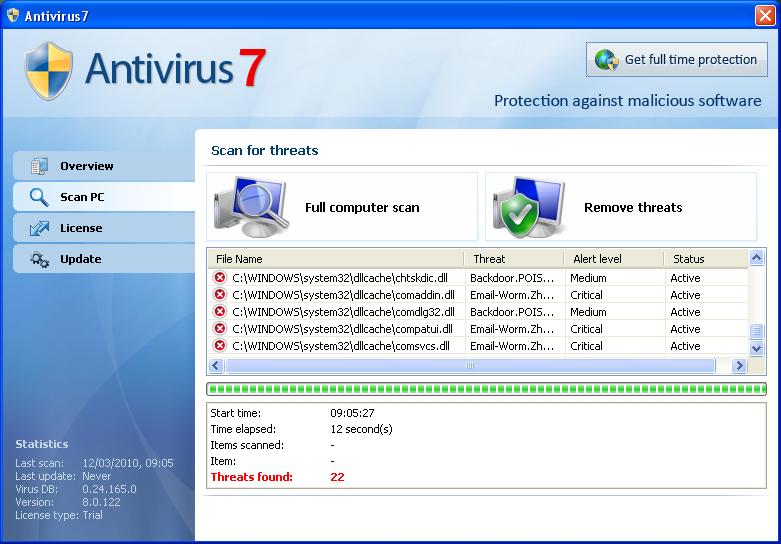 AV7 (also called as AV 7) is a typical rogue anti-spyware which helps to accomplish commercial goals for its creators. AV 7 is a direct copy of Antivirus 7 also developed for the same malicious reasons, so it similarly reports numerous threats detected after scanning the system. Before you take its reported information serious and purchase the offered AV7’s “full” version, scan your PC with a legitimate anti-spyware. You will see that only AV7 is reported as dangerous cyber threat which must be removed from the system.

AV7, just like most of fake anti-spywares, is distributed via trojans infections that infiltrate target PC without any authorization at all. The same Trojans create and drop on the system fake randomly named files and also include Registry modifications to help AV 7 start once the computer boots up. Additionally, after its secret intrusion malware starts its typical misleading campaign dedicated to rip unsuspecting user off. AV7 shows bogus system scanners, pop-up ads and security warnings once it becomes active and additionally starts reporting that machine is in danger and needs to be fixed. Scanners of this rogueware usually show hundreds of insecure items “detected” but when it comes to removal they claim to be useless. The suggested way of eliminating risks and removing viruses detected is AV7’s registered version which demands payment.

Actually, AV7 is not capable of detecting any computer problems and solving issues that it reports. After being installed, program is known only to have caused Operating System troubles such as lower speed of PC’s performance or more spywares let inside the machine. It’s should be under the question if it is worth purchasing AV7 rogueware. Delete AV7 if it is detected on your system, before it’s too late to save your computer and personal data stored there. Rogueware may disable you from running your legitimate anti-spyware, so reboot your computer at first and tap F8 button. Perform removal instructions of AV7 in Safe Mode with Networking.