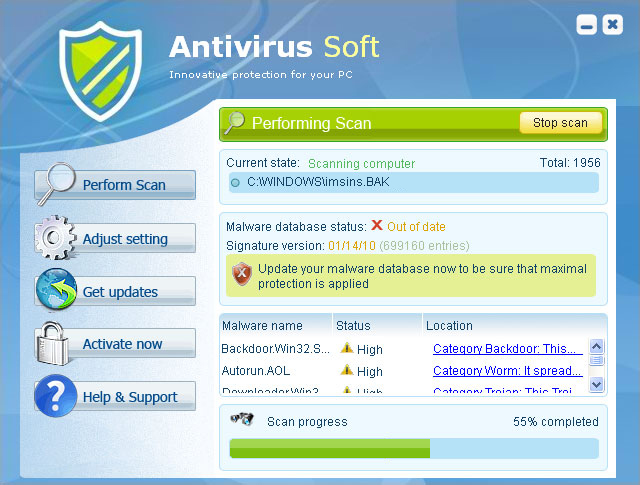 In the beginning, Antivirus Soft looks like a perfectly normal and legitimate anti-spyware. Note: don’t fall into its professionally created looks because just after being installed into the system it reveals to be just a new variant of Antivirus Live. Hailing from this nasty rogue, Antivirus Soft should be called just the upgraded version which is propagated on Newsoftspot.com or other blacklisted and porn websites. It must be added that sometimes this malware is installed through security vulnerabilities found with a help of Trojans. The trial version of Antivirus Soft firstly affects Windows Registry and creates its fake random files and drops them in the system. Once the computer boots up, Antivirus Soft is launched at once and additionally starts its malicious jobs which are concentrated into the only aim. This aim is of course the money required for a possibility to install the “commercial” version of Antivirus Soft.

To make unaware PC users buy, Antivirus Soft firstly displays fake system scanners, infiltration alerts and other security notifications. This parasite states that tons of malware are detected after checking the system and offers to buy its “full” version for deleting everything. At this point it is important to mention that these files are the same ones that are created by Antivirus Soft, so ignoring them is highly adviced. However, Antivirus Soft should be threatened in the opposite way because it makes much more damage for your computer if it’s left. If Antivirus Soft is detected, don’t waste your time. Use a reputable anti-spyware or removal guide written below and delete Antivirus Soft as soon as possible!

How to remove Antivirus Soft?

1. Restart your computer. As your computer restarts but before Windows launches, tap “F8” key constantly. Use the arrow keys to highlight the “Safe Mode with Networking” option as shown in the image below, and then press ENTER.

2. Open Internet Explorer. Click on the Tools menu and then select Internet Options.

4. Now you will see Local Area Network (LAN) settings window. Uncheck the checkbox labeled Use a proxy server for your LAN under the Proxy Server section and press OK.