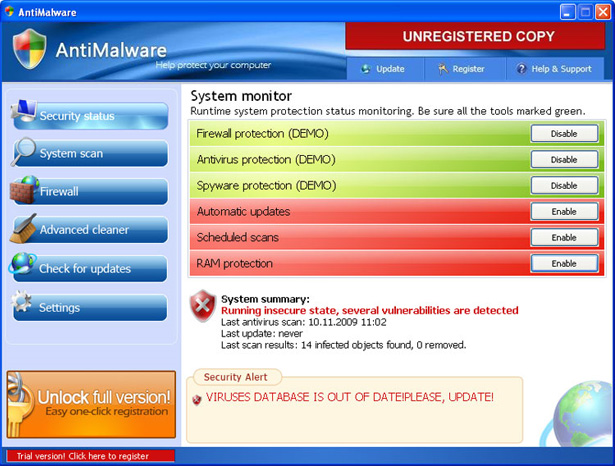 AntiMalware is a fake security application that was created by the same hackers who are responsible for another rogue named Active Security. Anti Malware is designed to come unexpectedly and run at startup. After entering the system, AntiMalware disables security software, so as to prevent removal. Don’t mix AntiMalware with Malwarebytes’ AntiMalware, which is a completely legitimate program, unlike the aforementioned parasite.

AntiMalware interrupts computer user by loading hundreds of annoying security notifications. Some of the messages read like these two:

There is no doubt that AntiMalware is one of hundreds of rogue anti-spyware programs. This application only seeks to make people scared about their computers’ security and sell its “full” version for removal. Don’t take it seriously and instead of supporting the scammers delete all of it’s files. Read the removal guide written above and remove AntiMalware for free.