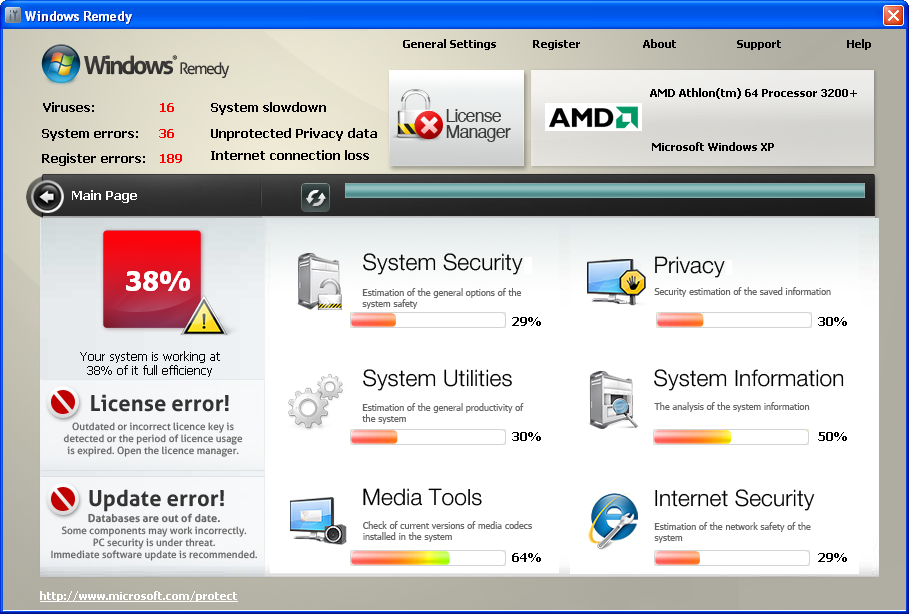 Windows Remedy is one of rogue anti-spywares that share the same GUI and act in the same way: firstly they claim about numerous viruses detected and then offer to purchase fake license. This group is also knwon for the Fake Microsoft Security Essentials alerts used to trick users:

Though it looks like legitimate tool, Windows Remedy belongs to the cyber-security world, so it must be removed from the system as soon as you can. In other way, you will receive more spyware on your computer that may initiate more dangerous activity inside. For removal, you may need a reputable anti-spyware tool and also safe mode with networking launched before. This should disable Windows Remedy’s alerts and scanners and let you launch the program for scanning.

The most annoying thing about WindowsRemedy is numerous alerts and scanners displayed that give only misleading information and have no informative value. Malware just like Windows Troubles Remover or Windows Troublemakers Agent typically comes with a help of browser hijacking techniques or Trojans that use security vulnerabilities in order to get inside without any authorization or user’s approval. As soon as it is installed, the same Trojans set Windows Remedy to start as soon as you reboot your computer and then malware starts its misleading campaign:

System component corrupted!
System reboot error has occurred due to lsass.exe system process failure.
This may be caused by severe malware infections.
Automatic restore of lsass.exe backup copy completed.
The correct system performance can not be resumed without eliminating the cause of lsass.exe corruption.

Warning!
Name: firefox.exe
Name: c:\program files\firefox\firefox.exe
Application that seems to be a key-logger is detected. System information security is at risk. It is recommended to enable the security mode and run total System scanning.

Its activity starts with fake system scanners telling that numerous viruses is inside the system. Windows Remedy also displays fake warnings and pop-up ads that will notify its victim about the detected threats. These threats that are claimed to be on board the computer in reality are invented or legitimate your system files, so you shouldn’t remove the ‘threats’ reported on Windows Remedy alerts. This may lead you into computer’s damage. The most important thing is to remove Windows Remedy once as it was noticed on your computer, so get a reputable anti-spyware for that which was updated. Besides, it’s strongly recommended to get the licensed versions of anti-spyware (spyhunter is recommended) and anti-virus programs that will keep your computer protected against this or other malwares.