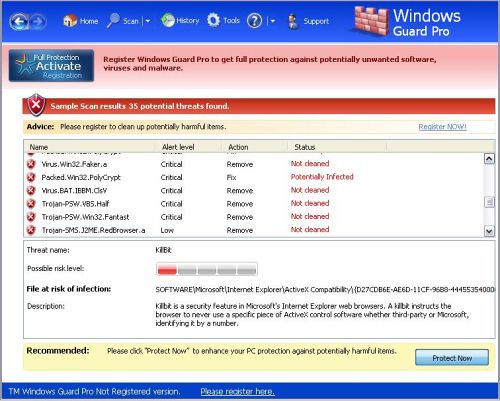 Windows Guard Pro is a rogue anti-spyware and a clone of the infamous Windows Security Suite as well as some less popular rogues, including Ultimate System Guard, which was unleashed upon the world on the same day. This parasite is essentially a fake security program, which misleads the user into thinking he is infected (by something other than Windows Guard Pro) and thus sells it’s “licensed version” – an illusion more so than a real piece of software – supposedly required to dispose of the threats infesting the user’s system.

Windows Guard Pro enters the system nefariously, oftentimes employing the use of various programs, such as Vundo and it’s variants. There are many ways this parasite can theoretically infect the system, ranging from the user clicking spam mail links or downloading codecs online, to downloading freeware applications bundled with the parasite. Once inside and active, this parasite floods the user with popups and fake system notifications, supposedly to inform him of an infection or multiple infections present on the system. All the popups link to the purchase page of Windows Guard Pro. This rogue will also perform fake system scans, which produce results full of false positives.

Windows Guard Pro’s presence on the system will only result in a decrease in performance and tons of popups. There is no doubt that Windows Guard Pro must be removed from the compromised PC immediatelly.