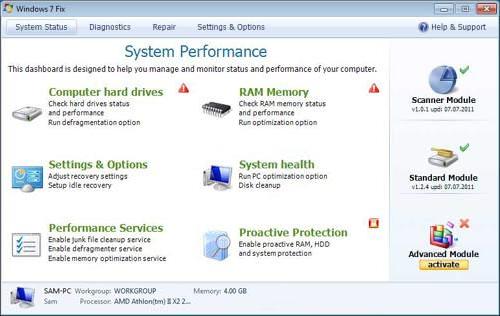 Windows 7 Fix is another member of fake defragmenter family released in the beginning of July. Created to swindle the money from trustful PC users, this threat gets into the targeted system similarly to other its version Windows XP Fix and Windows Vista Fix: it uses Trojans that come inside through security vulnerabilities found. That means that if you don’t have a licensed anti-virus and anti-spyware installed, you are in a great danger of this threat. Windows 7 Fix looks like its forerunners but infects only those machines that have Windows 7 OS running. To avoid this cyber threat or remove it from your computer, use Spyhunter anti-spyware which will eliminate infected files.

Once the trial version of Windows 7 Fix gets inside, it additionally makes some unnoticeable changes to your computer: it deletes shortcuts found in various locations and also hides files and folders in order to make you really believe that something is wrong with your hard drive. By adding some Registry keys of its own, Windows 7 Fix configures your machine to launch its executable after each system startup and then starts reporting numerous hard drive errors:

Windows 7 Fix Diagnostics
Windows detected a hard disk error.
A problem with the hard drive sectors has been detected. It is recommended to download the following sertified <sic> software to fix the detected hard drive problems. Do you want to download recommended software?

Windows 7 Fix will also show itself through a hard drive scan that pops up without any permission asked. The scanners of this fake defragmenter will always detect something malicious even on a perfectly clean hard drive, so keep in mind to ignore them. The real intention of this activity is to frighten users and make them believe that their computer’s hard drive is bundled. Scammers who released Windows 7 Fix and other scams expect their victims to believe this story and pay for the ‘licensed’ software promised to be powerful enough to fix the hard drive. However, all these dozens of errors and fabricated scanners must be ignored. In order to fix your machine, you must remove Windows 7 Fix which will continue to bombard you with its alerts about numerous errors found. Run updated Spyhunter to fix your machine immediately.

Windows 7 Fix, just like many other fake defragmenters that have been released earlier, may hide your files and folders. To fix the problem, follow these steps:

One response to “Windows 7 Fix”