Your computer can be used as a slave and hacekrs do it with the help of Vatico Monero Miner virus. It is classified as a trojan horse, and once deployed on the computer it uses the resources of device to mine Monero cryptocurrency.

Mining virutal currency might be a good way to monetise your computer as you can make some extra bucks by simply running this application in the background. However, when you don’t know that this miner is operating on your computer and it is mining money for someone else – it is considered to be a trojan infection and you should not let it happen. We have seen this happening before as BitCoinMiner virus was infecting computers and Vatico Monero is really similar, only this time it is mining Monero instead of Bitcoin. 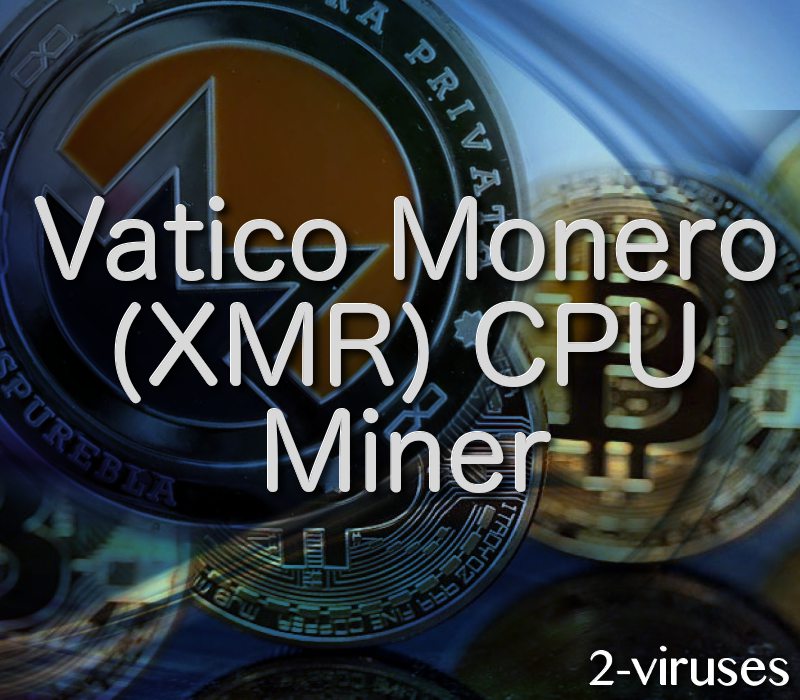 There are tons of legitimate miners that you can download for free, but sometimes (as in this case) cyber criminals take advantage of it and customize the code of miner like this and distribute it bundled with other free software. So if you have noticed that application like this is operating on your computer, it probably entered your system alongside with other free software. Can you recall downloading some freebie lately? It can be the cause. During the installation you might be asked if you prefer to additionally install some free software. Usually such an option is marked as a default, so if you just run through the installation without paying much attention, this trojan will land on your hard drive automatically.

How to tell if computer is infected with Vatico Monero virus?

It is relatively easy to tell if the computer is infected with miner. There are several symptoms that can indicate the presence of such infection, but probably the most notorious one is high usage of CPU and GPU. Miners use computer power to solve various tasks, therefore CPU and GPU are used to the fullest, sometimes reaching 98% or more. That will eventually result in a very slow work of your computer and even random freezes. If you are suspecting that your system is running slow due to this infection, simply open the task bar and look for the process called ‘Vatico Monero Miner’. By the way, it can be named as ‘moloko.exe’, so look out for that too.

Now, for a quick fix, you can simply end the malicious process and you will experience enhanced work of your computer right away. However, this is not enough as this process will come back every time you reboot your computer. To get rid of it permanently, you should delete files associated with this virus. Usually those files are placed on the ‘Roaming’ folder. It can be found by following this path: %UserProfile%AppDataRoaming. Once you are looking at the Roaming folder, find ‘Vatico’ sub-folder and delete it. After that, you should scan your computer with a reputable anti-malware application, such as Spyhunter. Vatico Monero miner virus can leave some files hidden on your computer, thus they need to be removed. AM application like this will detect all suspicious and possibly dangerous files and remove them automatically.