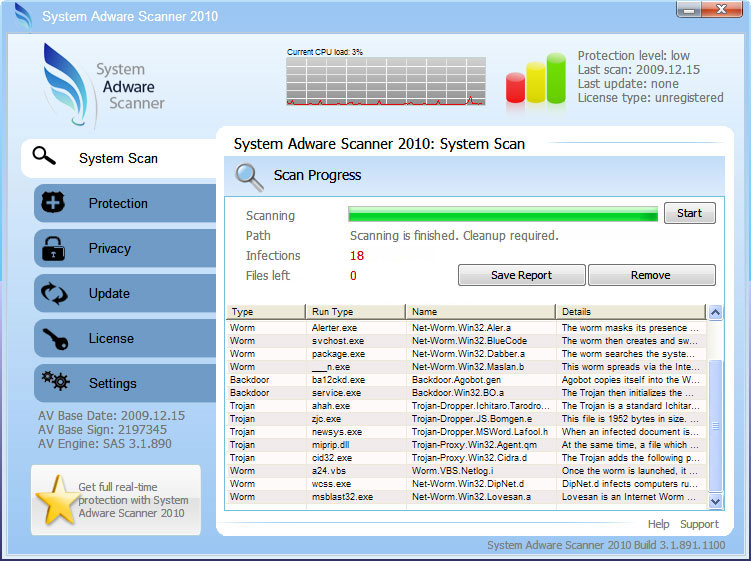 System Adware Scanner 2010 is a rogue anti-spyware program that was released by hackers only to steal aggressively people’s money. SystemAdwareScanner2010 uses malicious methods such as fake system scanners, misleading reports and notifications trying to trick users into purchasing its “full” version. The truth is that such version does not even exist and similarly to the trialware it affects the proper operation of the PC. Do not take SystemAdwareScanner 2010 as a real security tool and do not pay for it! Please read the information below to know how it works and remove this malware once you see its actions.

System Adware Scanner 2010 starts with enabling all the security software found on board. When the program makes itself protected, it configures the system to start automatically when Windows boots up and begins to display fake scanners for malware. Have no doubt that System Adware Scanner 2010 will detect hundreds of infections on every computer, even the machine is completely new. To make everything convincing even more, protection center will display fake security warnings and will claim about dangerous activity detected, for example:

Warning: Your computer is infected
Windows has detected infection!
Click this message to install the last update of Windows Security Software !

All the PC users are highly recommended not to delete the files reported by System Adware Scanner 2010 as infections because all these files in reality are invented by the same rogue or are even legitimate Windows files. This application seeks only to convince users that after purchasing so called “licensed” its version they will be able to get rid of all these threats. Don’t follow these suggestions! If you have noticed System Adware Scanner 2010 and its misleading activity, don’t waste your time and delete the parasite. Please use the removal guide and remove all the data associated to Systen Adware Scanner 2010.