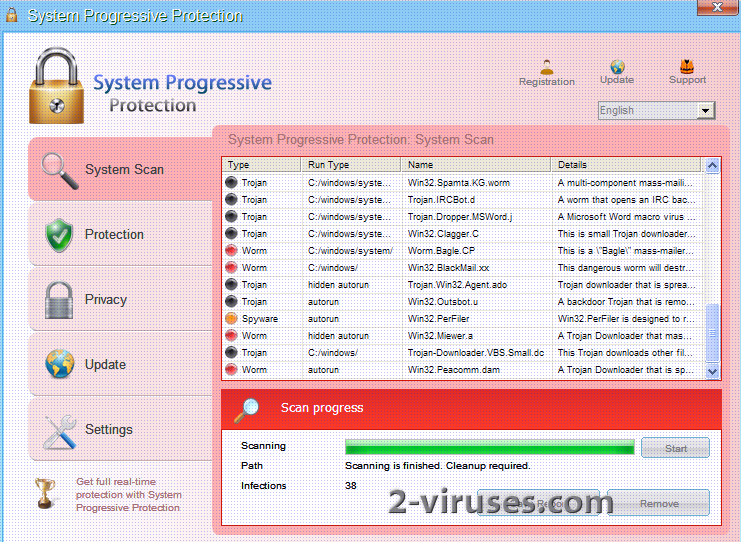 System Progressive Protection is another incarnation of WinWebSec rogue antiviruses – an application that scares people actively into thinking that their PC is heavily infected and need specific program to cure dozens of various unrelated PC parasites.This fake antivirus is distributed using exploit packs mostly, aka infected websites that either display advertisements for antiviruses, or infect your PC through vulnerabilities. For that you do not need to click on anything, thus most of the people do not know how this rogue found its way on the computer. You can get the parasite in other ways too: with fake codecs, videos or shareware applications that are bundled with trojans. You should not open weird attachments in the emails you get too, as these might be infected as well.

Typically, System Progressive Protection is activated several minutes after actual install takes place to hide its tracks and only then it will start showing alerts. This rogue will causes many problems on PC. First thing one sees is a bunch of various popups claiming that your PC is under attack. The alerts range from “informing” about hacking attempt to scaring about legitimate applications being infected and thus blocked. This rogue will deactivate majority of antivirus programs too. Some alerts are listed below.

Next, you will notice that you can not launch legitimate applications. You will get an annoying alert informing about infection in the file you have tried to execute. This will happen if you try running antivirus as well. If you click on System Progressive Protection alerts, the scan window will appear and show tens of infections on the PC. The application will demand payment for removing them. While that many of parasites are possible, one will quickly note that everything else is blocked and problems are caused by the fake antivirus itself and not some sort of anonymous Trojans. We can assure, that all the rogue “detects”  are  not real and this classifies this program as a fake antivirus. Paying for such malware is highly not-recommended, as the money will be used for making more computer parasites. Stay clear of this scam! It’s a dangerous program that must be removed without any doubt. In case you became a victim of its creators already and transferred the money already you should get in touch with your credit card company and cancel your payment. Otherwise, your money will reach the cyber criminals but the problem will stay on your computer.

The rogue lists its version as System Progressive Protection 3.7.17 usually. There might be couple other versions  numbers used, but you can be sure there are no version 2 or 1, nor they are different in functionality.

These instructions are shown in the video below too.

Security researcher SiRi posted a registration code for System Progressive Protection : AA39754E-715219CE. It should work with any email.