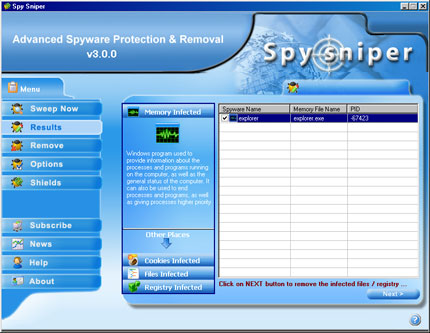 Spy Sniper is a fake PC scanner which was created to look like legitimate antivirus software. Recognized on 2005 for the first time, Spy Sniper renewed it’s malicious actions and people are tricked into spending their money for this useless application again.
Even though this is the second time Spy Sniper was unleashed upon the world, the rogue hasn’t changed much. It gets installed after trojans break into the PC and acts like it’s scanning for viruses. A lot of research has been done and it was discovered that this malware is able to find parasites even on a clean and uninfected system. This is most likely because Spy Sniper shows false positives. Innocent web surfers are scared and scammed into purchasing the paid version of Spy Sniper.
The official Spy Sniper web site is www.spy-sniper.com and this is a page, where the user is linked automatically. After reading many positive statements about this malware, there is a great possibility to be fooled. Users should pay attention and not install Spy Sniper. Moreover, it must be deleted right away after appearing on the computer system.