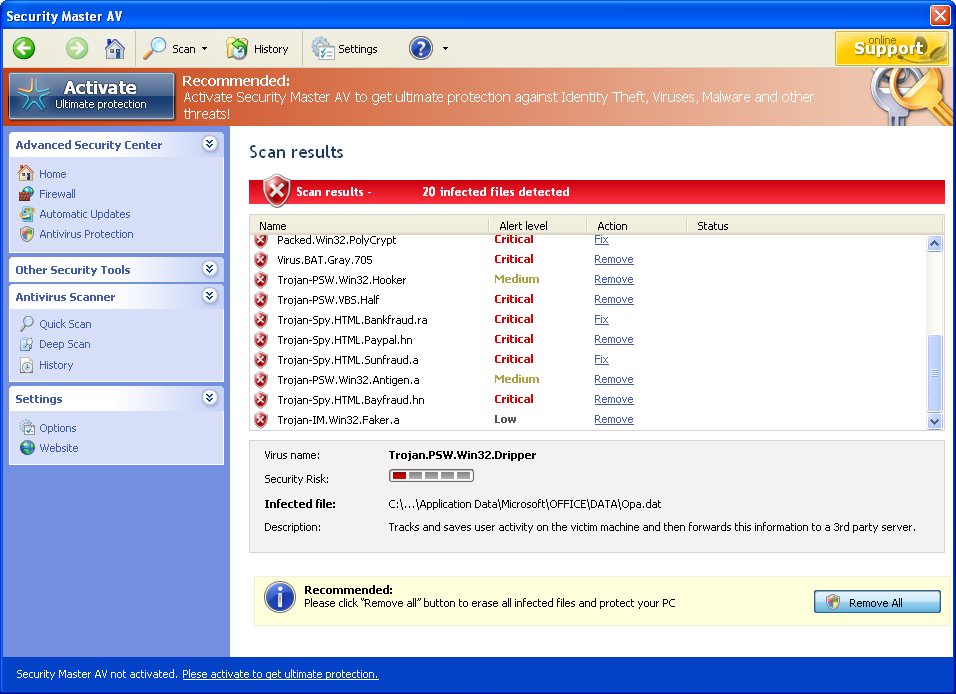 Security Master AV is a rogue anti-spyware utility developed to rip people off. It is released by the same hackers who should be blamed for creating the whole Virus Doctor family where My Security Engine, Security Antivirus and Security Guard are the earlier released rogues. Being no particularly different from its initials, SecurityMasterAV propagates itself via trojans that pretend to be online scanners, updates or video codecs needed to be installed. Without any aware people let these scams inside their computers that later assist Security Master AV to infiltrate the system.

Result of the secret infiltration of Security Master AV is a misleading campaign trying to make people worried about their PCs. It means that malware shows fake system scanners and multiple popup warnings that announce numerous viruses detected. This state of machine creates a need to fix it without any delay, so rogueware offers to purchase Security Master AV commercial version. Some of such notifications dislayed by this rogue look like that:

System alert
Suspicious software which may be malicious has been detected on your PC. Click here to remove this threat immediately using Security Master AV.

The suggested way in reality is more than useless because you will purchase and install one rogueware program. It is not capable to fix any security issue and resolve privacy problems because it’s not a legitimate product. The commercial version of Security Master is known to have caused only OS troubles after being purchased intrusion, so save your money and keep away from it! Besides, Security Master AV makes the compromised computer vulnerable and may disable other antivirus programs installed on the target PC. It must be clear that you have to remove Security Master AV as soon as you notice it on your machine, so run a full system scan and eliminate it.